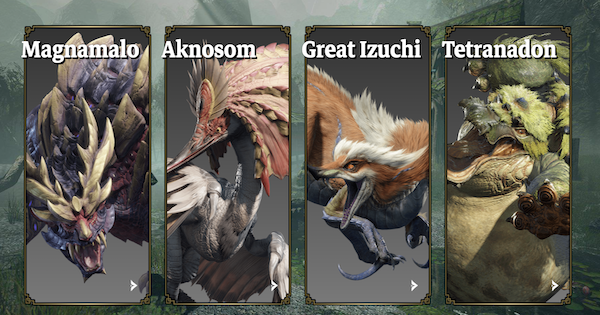 Welcome to the Monster Hunter Rise (Switch) guide on new monsters! Find out about the Magnamalo, Aknosom, Great Izuchi, & Tetranadon in MHR! Get more info on these monsters!!

A new monster introduced in the January 7th Digital Event, Goss Harag is an abominable yeti-like monster that forges a blade of ice out of its own breath! It can be found in the new locale of the Frost Islands.

Will Play A Main Role In MHR

Spearheading all of the new monster additions in Monster Hunter Rise we have the Magnamalo. This menacing creature will be the game's "main" monster, and can be seen fighting a Tobi Kadachi in the promotional artwork so far.

Check Out Magnamalo In Detail Here

The Somnacanth is a new monster modeled after a mermaid. It has the power to expel a dangerous powder that puts its foes to sleep, after which it attacks them with no mercy.

Check Out Our Somnacanth Guide Here

Bishaten is a brand new monster based off the Japanese mythological creature, the Tengu. It has a powerful tail and wings, and will throw a variety of dangerous persimmons at you!

Check Out Our Bishaten Guide Here

One Of The Stronger Bird Wyverns

The Bird Wyvern Aknosom is a powerful foe that uses its crest to corner its prey. It also appears to have a fire-elemental breath attack at its disposal as well.

Check Out The Aknosom Guide Here

Come At You As A Pack

The Izuchi are rare monsters that actually attack in groups of 3. With two smaller Izuchi at its side, this 3-pronged attack is a first of Monster Hunter and is sure to require caution for those engaging this monster.

Attacks Change With Its Size

The Tetranodon is a large, amphibious monster whose attacks change along with its size! It will apparently devour whatever is in front of it and grow bigger - facing it will no doubt require adapting to its changes on the fly.

Check Out Our Tetranadon Guide Here

Rakna Kadaki looks much like Nerscylla from the previous games. Nerscylla is classified to be a Temnoceran monster, and so the likelihood that Rakna Kadaki is the same is quite high.