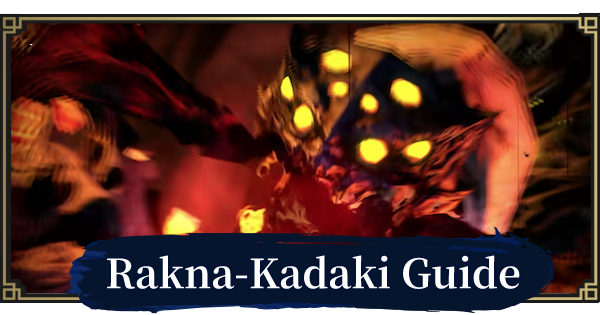 There is a chance that the default armor of the Charge Blade in the demo is Rakna Kadaki Armor. The weapon has its distinct eyes and the body armor resembles its cocoon.

Very Likely To Be Fire-Type

The Switch Axe seemed to have fire elemental attributes in the offical trailer. Although in the demo the fire came from a grenade, the trailer alludes to Rakna Kadaki being a fire-type monster.

Rakna Kadaki's design seems to liken a goblin spider. Additionally, it seems that in ancient Japan, powerful tribes who did not follow the rules of the dynasty were called spiders, or 'Yatsukahagi'. We may come to believe then that the design was based upon this.

Rakna Kadaki looks much like Nerscylla from the previous games. Nerscylla is classified to be a Temnoceran monster, and so the likelihood that Rakna Kadaki is the same is quite high.

In the trailer, the area in which Rakna Kadaki first appeared seems to be a volcanic area. Nerscylla which is presumed to be of the same species resides underground a volcano as well.

Rakna Kadaki wears cocoons on its body. Nercylla on the other hand wears Gypceros skin giving it an electric elemental affinity. With that, we may assume that its cocoon has a strong protective effect that may raise its defense, especially since it does not need to wear the skin of its prey.

The trailer showed us an eerie close-up of Rakna Kadaki wherein it opens its mouth. The cocoons on its back also seem quite suspicious in a way that they are not just for aesthetic but rather may possibly attack as well. Images show that it traps living prey in its cocoons.