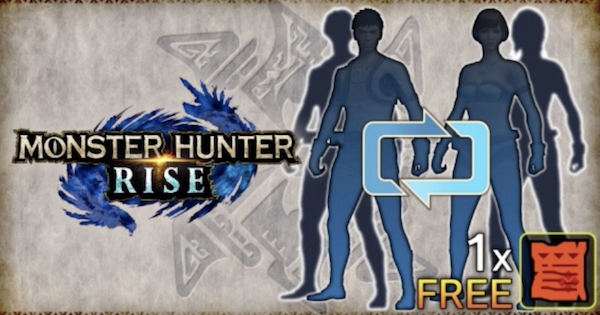 The Character Edit Voucher allows you to reedit & change your character's appearance in Monster Hunter Rise (Switch)! Read this MH Rise guide to know how and where to get, & use it!!

Character Edit Voucher - How To Get

Must Be Manually Downloaded

While part of Update 2.0, the voucher must be downloaded as a DLC in order for you to use it. You can also choose to not download it for now and reserve it later. Also note that you only get one ticket for this time.

The Voucher Is Free

Note that as part of Update 2.0, this Character Edit Voucher is for free. You only need to manually download it via the Nintendo eShop menu.

Fastest Way Is To Talk To Senri

Talking to Senri the Mailman is probably the easiest method of getting the Character Edit Voucher. While you can get it directly from the Nintendo eShop, talking to Senri allows you access to it while in-game.

Buy More To Get More

You can get more Character Edit Vouchers by purchasing them from the Nintendo eShop. As these require real-life money to get, use them sparingly and only if you have to on existing characters.

Character Edit Voucher - How To Use

The Character Edit Voucher can be used via the loading screen. Press "Y" in the character select menu to edit a character with a voucher. Note that you only use up the voucher if you save your changes.

Change Your Body Or Face

Using A Voucher Is Permanent

If you save your changes, you will use up a Character Edit Voucher. There is no other way of getting it back. Use it only if you really want to change an existing character, or if you want to make use of new DLC character features on your old character.

Points Of No Return Guide