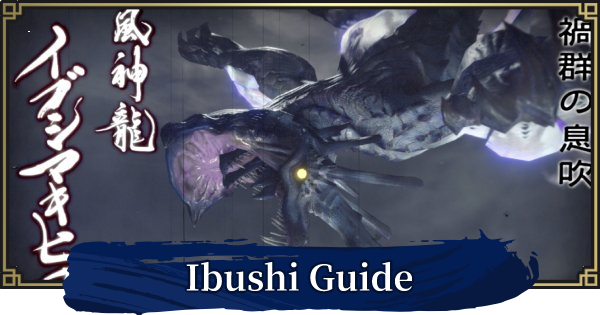 How To Unlock Ibushi Quest

Ibushi's Rampage quest can only be accessed once you finish a number of ★6 Hub Quests. It will appear as an Urgent Quest required for you to complete to ascend to ★7.

Ibushi can only be fought through a Hub Quest. The player can choose to fight it alone or with 3 other players. Once you beat Ibushi as an Urgent Quest, it reappears randomly as one of the high rank Rampage quests.

Battle Other Monsters During The First Half

As the final boss of the Rampage, Ibushi appears only during the last part of the Rampage. To force it to appear, you have to battle and survive against waves of monsters first. Try to maintain your gate's health and prioritize taking the gate destroyers first. Fortify the Area 1 with a lot of weapons to minimize the damage to the final gate.

As Ibushi's attacks are terrifyingly strong, try to maintain a full barrier health before it arrives. It can be very difficult to win against Ibushi if your gate is already damaged, so use whatever means to protect the barrier!

Setup Defenses At The Final Barrier

Call Fugen & Yomogi Only For Ibushi

Make use of characters to deal significant damage against Ibushi by calling upon them once it arrives. Wait until the final wave and set both Fugen & Yomogi to help whittle down Ibushi's health.

Destroy Wind Barriers To Cause Ibushi To Fall

Ibushi can conjure Wind Barriers to guard some of its parts. Destroying these parts will cause it to fall, leaving it vulnerable to most attacks. Try to aim for these spots when taking it down.

How To Beat & Farm Ibushi

Attack During A Counter Signal

In Rampage, player attacks get amplified during a Counter Signal. The effect is lasts for a good while so attack within the duration of this buff. Also, remember to not attack with weapons without the Counter Signal as the damage is significantly less than attacking with placements.

Aim For The Parts For More Loot

Easy to reach parts such as the head, arms, and the tail are all breakable. Once Ibushi goes down, quickly go to these spots if you're a melee user and pummel them until they break. Breaking these parts increases your chances of getting more materials at the end of the rampage mission.

Shoot Ibushi Down To Stop Its Ultimate Move

Ibushi's ultimate move is to fling giant boulders from the sky, dealing significant damage to anything it hits. You can prevent Ibushi from doing this move by shooting it down using Ballistas. You can also shoot down the stones to destroy them.

Use Tornados For Mid-Air Attacks

While battling Ibushi, it will spawn several tornado spouts. Touching them propels you to the sky. You can use these placements to propel you upwards for a mid-air attack on Ibushi's wind barriers.

The auto ballista-wielding Yomogi is a character that can only be summoned once per rampage. Her effectiveness increases the longer she remains in the battlefield, making her a very effective weapon against Ibushi's waves. Back her up with Wyvernfire Artillery for maximum damage.

Do Not Panic & Keep It Cool!

Given the time constraints, it is very easy to get flustered and just attack head one. Although that is the case, keep a cool head and find opportunities to attack. Use Counter Signals only when needed and strike Ibushi's wind barriers to bring it down. Rinse and repeat.

Ibushi's breath attacks have a wide and far reach. If you are still unfamiliar with its pattern, move farther away just to be safe instead of relying on simple dodge rolls. Observe the wave and check if it is possible to attack.