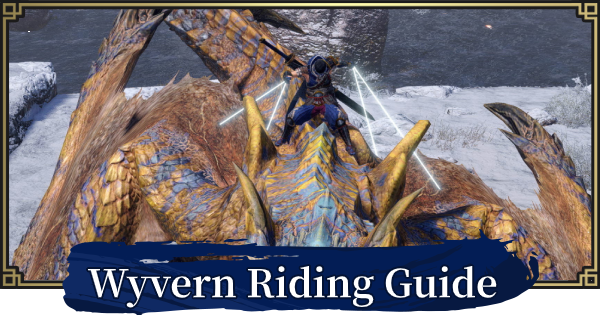 What Is Wyvern Riding?

A Way To Mount Monsters

Wyvern Riding is a new form of action players can take in Monster Hunter Rise. It involves mounting a monster and using it to move around! It's also possible to even attack monsters while mounted like this.

Wyvern Riding has a time limit to it - when you deal damage to enemies while mounted you'll see your timer increase. Conversely, taking damage will lower your remaining time.

Charge Your Gauge To Unleash A Powerful Attack

It's possible to fill up your Wyvern Riding Gauge by evading enemy attacks at the right time. Filling up your gauge will let you unleash a powerful attack called a "Mounted Punisher", dealing significant damage to the enemy.

How To Ride Monsters

Put Enemies In A Mountable State

By approaching an enemy that has been put in a susceptible condition known as the "Mountable State", the Ride Wyvern button will appear.

How To Make Enemies Susceptible

You can make a monster susceptible by dealing damage with aerial attacks and Silkbind moves. If you want to make it susceptible quickly, unleash a Silkbind attacks.

2. Aim After The Turf War

After 2 monsters are battling against each other, the defeated monster become susceptible. Use Endemic Life called Stinkmink to attract 2 monsters.

By using an Endemic Life called Puppet Spider, you can make the monster susceptible at once. Use it against the monster you have hard time hitting your Silkbind attacks.

Once you ride the monster, you can launch the monster you are riding to another monster to make it susceptible. By using this, you can chain the Wyvern Riding.

Be Aware Of Cooldown Time

You can't make the monster susceptible right after you've finished Wyvern Riding. You'll need to wait a bit to finish the cooldown time to use another Wyvern Riding on the same monster.

How To Attack / Move While Wyvern Riding

Wyvern Riding allows you to freely move around while mounted by using the left control stick while holding down R. It's also possible to attack and evade.

A swift basic attack. Pressing the X button repeatedly will let you launch a series of attacks.

A slower, lumbering attack with a wide animation but proportionally higher damage. You can also chain this by pressing the button repeatedly.

It's possible to regularly evade attacks, or perform an Emergency Evade. Also, dodging at just the right moment will provide you with a bonus to your Wyvern Riding gauge. It's also possible to "parry" enemy attacks if you time your dodge well, temporarily flinching/stunning them.

Note that Emergency Evades will use up one Wirebug gauge.

Running a monster you're currently riding into a wall by pressing Y will end your riding experience. It's also possible to destroy walls or down monsters if you aim a sufficiently large creature into them!

You can also chain launches by pressing the B button right when your monster collides with a wall. This will allow you to stay on the monster and keep dealing damage to it. However, it will cost you a wire gauge each time!

Once your Wyvern Riding gauge is filled up to the max, you can unleash a Mounted Punisher attack. This attack has a time limit however, so after some time passes, you'll be dismounted.

It's also possible to down the monster by pressing X and A while your gauge is full.

Some monsters will have different combinations of attack patterns with the L button. It'll be worth your while to try mounting a wide variety of monsters and see what they have to offer!

The susceptible status of the monster lasts for about 15 seconds. Since the monster in this status cannot move, use this time to sharpen your weapon, heal, or attack before using Wyvern Riding.

You'll be consuming Wirebug Gauge to perform Emergency Evade while riding the monster. Make sure you pick up the wirebug on the field to increase your max gauge to 3.

Use Mounted Punisher At The End

The Mounted Punisher forces you to end your Wyvern Riding. Use it right before the gauge runs out to fully utilize Wyvern Riding time.