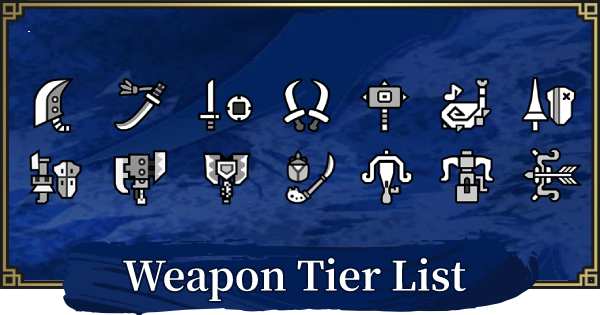 We are currently updating this article based on the latest Monster Hunter Sunbreak: Title 1 Update (Ver. 11) . Stay tune for more information!

No Weapon Type Is Truly "Best"

As for that, in Monster Hunter there is no single weapon that can truly be said to be the "best". If you manage to gain enough proficiency with it, any weapon you use will be highly effective. Focus on mastering a specific weapon to get the most results out of it.

Let us know why you think your weapon of choice is so strong in the ▼comments below!

Which Weapon Do You Think Is The Strongest (Sunbreak)?

Light Bowgun can complete quests at high speed due to its firepower when rapid firing piercing ammo. Also powerful with its Critical Firepower and elemental ammo. Wyvern Counter makes it possible to complete quests with a sense of stability.

As in Rise, Dodgebolt is a powerful move that deals damage while avoiding enemy attacks. Furthermore, Switch Skill Swap during a charge enables stamina recovery while maintaining the charge. Bow is very difficult to master, but the potential is tremendous.

Heavy Bowguns is powerful when it comes to Spread Builds. Users simply shoot the monster at point-blank range to inflict heavy damage. The shield parts can also be upgraded by equipping Guard and Guard Up skills, which is best suited for offense and defense.

New Silkbind Attack "Air Dash" is extremely powerful. It is a high-firepower move with a long no-flinching time, just hitting the Air Dash and Spinning Slash combo in rapid succession is enough to keep up a one-sided attack on the monster. In Sunbreak, the power of Ultra Element Discharge was also proportionally improved because of the higher elemental damage of the weapons.

Excellent Counter And Ease Of Handling

Through the Strongarm Stance, there are more possibility of dealing a True Charge Slash/Rage Slash to enemies. True Charged Slash is now easier to handle than before and can aggressively inflict heavy damage. Not only concerned with hitting the True Charged Slash, the strategy of safely damaging the enemy with a draw attack is also powerful.

Abundance Of Counter Skills Is A Strength

Long Sword's fighting style has changed drastically compared to that of Rise, with Sacred Sheathe Combo and Spirit Reckoning Combo as its mainstays, which are very powerful. However, it is also much more difficult to control than in Rise, so we gave it an A rank.

The new Silkbind Attack "Spiral Slash" is not in itself a high-powered attack. However, its strength lies in its ability to close the distance between you and the enemy. You may also use this ability while in mid-air, making it an amazing skill to have for any situation.

Compared to Rise, the attacks with the sword have been strengthened, and combined with a greater number of hands, its can now produce considerably higher firepower. It is agile in its movements, with many easy-to-handle actions. Metsu Shoryugeki also remains strong, but it has become a well-balanced weapon that is strong enough without relying on it.

High Stability When Guard Is Up

Although not much has been changed with the Lance, it is still a solid weapon with a guard that can produce decent damage. Also, this weapon's skill ceilling is higher than the other weapons in the game.

With the new Switch Skills "Bullet Barrage" and "Erupting Cannon", the damage problem from Rise has been solved. It is especially compatible with the new skill Redirection, which allows the user to use Bullet Barrage more often by recovering the gauge while avoiding monster attacks.

Powder Vortex Is A Safe Way To Deal Damage

Powder Vortex can deal heavy damage from a distance. Once you are able to learn how to control the insects, you will immediately feel its strength especially when used with Boosted Powder Extract.

High Damage And Can Stun

The hammer is one of the weapon types that has undergone many changes. Charge Switch: Strength and Water Strike, which were rarely used in Rise, have been improved and are much easier to use. Other adjustments are also good and actions such as charge attacks are now more powerful. Another strength is that the new Switch Skills are excellent.

The new Sharpness Recovery can be extremely powerful if used correctly. It is possible to contnuously attack without shapening your weapon during hunts.

Imagine mentioning that a weapon is really strong because of NargacugaLBG, the NargaLBG isn't even in used on top runs, Raw Pierce is really niche because in this game most monsters have bad shot hitzones and in the contrary, Slice and Elemental ammo become the best options

Great sword has similar times with the long sword how is it not s?

You know, maybe gunlance would be slightly higher, if you didn't try to maintain it's sharpness with a skill that never triggers while you use shells, due to them never critting.
This just shows laughable misunderstanding of how Gunlances actually work.

wow you guys really **** at using those bottom tier weapons

Ease of usage, utility in multiplayer, and damage all matter when playing this game. It's difficult to balance which is more important to a given player. I think you should separate these factors into different lists instead of flattening them into one.