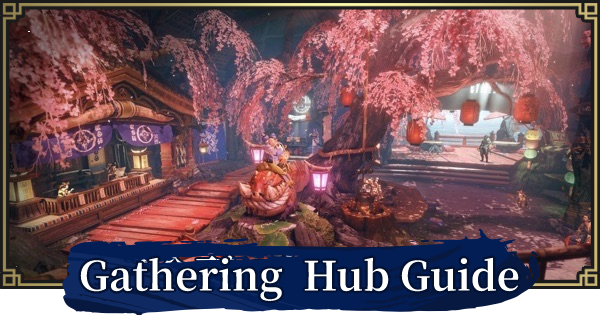 The Gathering Hub is an area to pick up quests and interact with players in Monster Hunter Rise (Switch). Find out about the facilities, arena quests, & food in MH Rise!!

All Other New Gameplay Features

What Is The Gathering Hub?

An Area To Pick Up Quests

The Gathering Hub is an area where you can find different quests to accept. In MHR, there appear to be two main types of quests: Village quests, and Gathering Hub Quests. Some Gathering Hub quests can also be done in a party with other players. There's a high chance that Village quests will be solo-only, as they were in past games.

Act As A Meeting Spot

In past games, the Gathering Hub was the only place you could meet with players (outside of while actually on a quest). It was possible to chat with players and take photos here as well!

Can Meet Players In Other Places In MHR

Unlike past games, you'll be able to see and interact with players in a variety of different places in Kamura village. In MHW: Iceborne, it was possible to play with others by many different means, but the Gathering Hub was the only place you could actually see other players. This will be different in MHR!

Filled With Many Other Facilities

There are a wide variety of facilities available at the Gathering Hub, including places where you can make food! There will also be a preparation area just like in past games. The Smithy and shop can also be found in the Gathering Hub.

▼See more info on the facilities below

In official previews of the game, most shots of the Gathering Hub show 4 people. We weren't able to see any images with 5 (or more). This, along with the fact that there seem to be a total of 4 chairs set up in the tea shop, leads us to believe the maximum might be 4.

You can pick up new quests at the Quest Counter, and if you're playing on multiplayer, you can take part in quests that your party members have.

Past Games Had Multiplayer-Only Quests

In previous games in the franchise, there were some quests which required a party and had a maximum of 16 players! We feel that the "Rampage" might fulfill a similar role in Monster Hunter Rise!

The Gathering Hub contains an area where you can get Arena Quests. These quests existed in past games as well. Notably, they required you to take on certain monsters with a fixed set of gear and items!

The preparation area has been merged with the Gathering Hub! Here you'll be able to access the Smithy, where you can craft and upgrade your gear. Additionally, you'll be able to hire Meowcenaries to aid you on your quests, as well as buy and sell items.

Here you can eat food which will give you a buff upon starting a quest! In past games, food could raise your HP and stamina, as well as provide other various effects!

At the General Store you'll be able to buy consumable items, ammo for bowguns, and coatings for the bow! In past games, it was also possible to buy things in bulk and have them sent to your chest.

Some past games of the Monster Hunter franchise also included Gathering Hubs which had hot springs in them! We haven't been able to confirm their return in MH Rise, but given its overall Japanese-inspired theme, we think it's entirely possible hot springs might be featured!