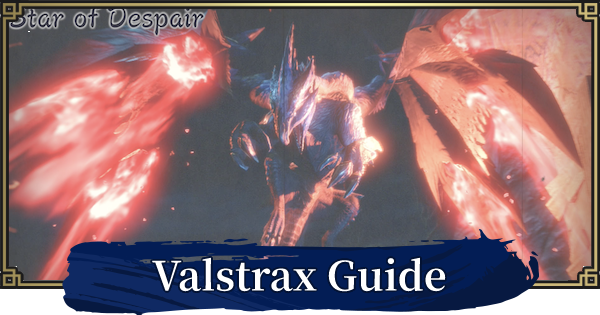 Valstrax is a ferocious dragon dubbed as the "Crimson Glow". It uses its speed to devastate its enemies, crashing down on the ground with breakneck speed. Be careful when fighting this monster as it has a lot of moves that can easily cart any veteran hunter!

Valstrax is a new monster that came with the recent Update 3.0 patch. It comes together with new quests and monsters like Narwa The All Mother and Apex Zinogre.

※ Based on actual values in game!!

In order to unlock the quest require to unlock Valstrax, you must first reach HR 100. Complete easier tasks and farm Rampage quests in order to quickly reach this Hunter Rank!

To unlock Valstrax, you must first clear the 7★ quest, The Allmother. In this quest, you have to fight and defeat both Ibushi and Narwa The All Mother. This can be a pretty difficult fight so bring your best gear and items. Playing this quest with friends is also way easier than tackling it alone.

Valstrax's attacks are wide and fast. By having the Evade Extender Skill, you will increase your evasion distance and it will be easier to escape from the range.

Being stunned by Valstrax's attacks may lead you to be damaged by the second time which can faint you due to its higher damage. By adding Stun Resistance Lv 3, you'll prevent yourself from being stunned and having a chance to evade again if you were hit by the first attack!

Crimson Glow Valstrax utilizes Dragon-element attacks to deal damage. Increase your chances of surviving its attacks by increasing your character's Dragon Resistance. Use decorations or eat Dangos to easily boost it!

Valstrax can combo your character to death if you get caught with its initial strikes. Always leave one Wirebug charge so you can get away from these combo attacks.

Don't Wirebug Immediately When Down

As said above, Valstrax uses multiple attacks to whittle down your HP. Getting up immediately after getting downed by such attacks can leave you vulnerable to a more powerful attack. Make sure that Valstrax's attacks are over before going up and recovering!

Destroying Valstrax's Chest deals a lot of damage to it and it also forces Valstrax to go down. Find moments where you can go in and strike to break it. Note that this might take a long time so be persistent while dodging Valstrax's deadly attacks!

Run Away From Its Ultimate Attack

▲ Do not group together when it comes crashing down!

When using its ultimate attack, Valstrax zooms up to the skies then crashes down to the earth with terrific speed. While it is possible to survive this attack, getting hit by it has a high chance of carting you. Try to get out of the map or if you are confident with your dives, do a dive to dodge.

Do Not Huddle When It Dives

If playing together, do not group into one spot when Valstrax does its ultimate move. Doing so will leave your whole team vulnerable to a devastating team wipe, leaving you to restart the whole quest.

Attack From The Sides

Despite being a dragon known for its speed, Valstrax is not a nimble dragon. It usually stays put and will try to attack you with its long tails or wings instead. Keep moving and try hitting it from the sides as the front is quite dangerous. Aim for the head or the chest to bring it down if you can. The tail part is also relatively safe to attack.

Attack The Forelegs To Knock It Down

Valstrax will be knocked down if its forelegs were destroyed. You can knock it down without dealing much damage if you attack it from its side.

If you need some breathing room to sharpen or recover HP, you can throw a Flash Bomb to blind Valstrax. Note that this can make Valstrax go berserk and the effect only lasts for a few seconds. Also, the effectiveness of the Flash Bomb dwindles with every use.

Element-Type Weapon does deal low damage to Valstrax with the body parts that were glowing. Although it can deal a decent damage for the parts that were not glowing, Dragon-Type Elements wont work against Valstrax. So try using a Non-Elemental Build in the meantime until you get used to it.

Remember The Wing Forms Of Valstrax

Valstrax changes the position of its wings. When Valstrax's wings are facing backwards, it mostly uses melee attacks. If its wings are facing forward, Valstrax uses long-range attacks. By remembering the wing patterns, you will able to this to your advantage to get a clear hit and idea of what will Valstrax attacks may be.

Crimson Glow Valstrax will deal higher damage while enraged and will attack nonstop. You should keep an eye on its attacks and avoid them as soon as possible. Also, this strengthened form is different from strengthening its wings.

If Valstrax starts to fly in a circular motion around in the air, this is the sign that it will launch the Ambush Comet Attack. This attack deals with high damage which can wipe a whole party. So it's better to prepare to evade its attacks when it starts to circle in the air as Guard won't help you in this one.

Since standing right in front of Valstrax is dangerous, try to do the diagonal front strategy. When fighting Valstrax, aim for its head from the side and stay as close as possible.

Valstrax Will Strengthen Its Wings

When Valstrax strengthens its wings, its attacks will be stronger and the attack range will expand. So try to avoid Valstrax's attacks more than usual.

When enraged, Pierce and Stab Attacks occur twice in a row. If Valstrax is enraged, its head will glow with the color of crimson. Take note that its combos can be evaded continuously. After Valstrax's second attack, you can use it as a chance for a counterattack.

When the wings are facing backwards, it uses a rush attack that pierces like a spear. Since this attack has a longer range, we advise you to evade this sideways.

▲ It is possible to evade by passing through depending on the terrain.

After using a Rush attack, there's a chance that Valstrax will use a Wing Piercing Attack followed by a Spinning Attack. Despite its wider attack range, it can still be evaded by going below Valstrax or use the area's terrain as an advantage.

If the wing is facing backwards, it can use a foreleg Stab Attack. It is difficult to avoid after seeing the attack alone, so let's make a rule to evade sideways when you see it attempt to attack with its foreleg. It also attacks 2 consecutive times when enraged.

After strengthening its wings, it will perform a Rush Attack going midair and use the Airborne Rush Attack. So if you manage to avoid the first attack, try to evade by running sideways and evade diagonally.

When its wings are facing forward, it will use them to slam the ground. You can evade this by keeping a safe distance away. Be careful of this attack especially when it's enraged as it can perform this twice. Your safe zone here will be the diagonal front area.

When the wings are facing forward, Valstrax uses somersaults forward and releases explosions afterwards. Run in the same direction as Valstrax and roll forward to avoid its somersaults.

Valstrax may spread open its wings forward and use them to attack you. Even if the attack is wide, it only swings from one part. You can avoid this attack by just going to the opposite side of the swing.

When Valstrax's wings are facing forward, Valstrax will breathe out to attack enemies in front of it. The attack will be aimed right below its face and in front of it. You can still attack it diagonally, but make sure to keep a safe distance as you do so.

The Crimson Beam Attack also occurs when its wings are facing forward and this deals high damage. When you notice Valstrax attempting this move, try to evade sideways as soon as possible since this attack is a straightly aimed one. If you successfully evade, you can use this opportunity to perform a counterattack.