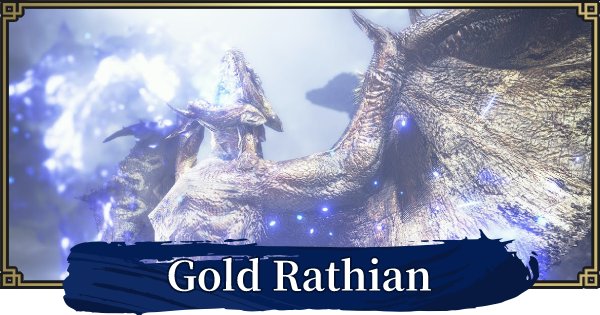 How To Fight Tips & Tricks

To take on the challenge, it is recommended to equip yourself with Absolute Petalace. By taking the camp's Prism Spiribird, you can greatly increase their strength and defense. Gold Rathian also use a lot of breath moves, so it is recommended to increase your fire resistance as much as possible.

If you are hit by a sommersault tail attack, you will be inflicted by a powerful poison. Since its energy decreases rapidly, activate the Poison Resistance skill. It cannot be disabled, but it can reduce the damage.

Check Out For Its Incandescent State

▲The head and chest turns blue during the Incandescent State

With the passage of time, the Gold Rathian enters the "Incandescent State". In this state, Breath attacks and somersaults are enhanced. However, The flesh of the head is softened and can be removed by dealing a certain amount of damage to the head. Aggressively target the head to remove the Incandescent State.

▲It is removed along with a knockdown

While in a state of Incandescent State, attack the head aggressively and aim to disarm it. You can aim at the head by restraining it with a flash ball or trap. Also, since there is a gap created between the breath and somersault dodging and counterattacking should be done.

Damage Increases When Head Was Broken

Keep attacking the softened head while it is in the Incandescent State, and if possible, aim to destroy the part. The head of the Gold Rathian, at normal conditions, is a tough place to attack. After you destroy it, it will be softened and be counted as a weak point of the monster.

Fall Back When It Starts Using Charge Breath Attack

When the Gold Rathian is charging for a breath attack while remaining in the air, it is a signal to charge breath. There is a long pre-movement, so hurry to get away from the area. The explosion has a wide range, so it is dangerous to try to avoid it with minimal movement.

When the Gold Rathian starts to face sideways, it is a sign that a breath combo will happen. The sequence is left and right breaths, then summersault, then frontal breaths. If you keep a certain distance, you will not be hit by the somersault, so avoid the breath calmly. Note that when it is angry, it will unleash a charge breath at the end.

Wide Attack Can Be Dodged By Backing Away

When the Gold Rathian steps forward, it will launch a Somersault afterwards. While it is stepping forwards, head back to dodge. When it is enraged, after this move it will deal a somersault from the side. After that attack is a chance for attack.

Leave The Area If A Somersault Is Performed

When the enemy stand up it is a signal for a somersault combo. Keep your distance so you will not be hit. There will be a lot of open time to attack in this combo so make sure to dodge and attack.

Gold Rathian - How To Unlock

The quest for unlocking Gold Rathain can be obtained after finishing the "Raining Fire" quest where players need to hunt Seething Bazelgeuse. This quest can be played if the hunter reached Master Rank (MR) 10.

Chart On How To Unlock Gold Rathian