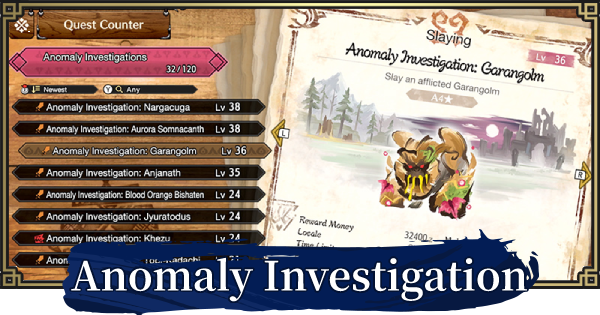 What are Anomaly Research Quests?

Anomaly Investigation Quests are the new Anomaly Quests that will be added in the first massive expansion. Each quest has a set level, and the higher the level, the slightly stronger the monsters and the better the rewards.

Maximum of Quest Level will be released in future

The maximum of Anomaly Investigation Level will increase in the future updates. The second massive expansion will be released at the end of September.

The Play Conditions are Randomly Determined

All the play conditions, such as the target monster, the locale, and the number of players are randomly determined.

How To Unlock A5★ Quests

Talk To Bahari When You Reached Research Level 51

Once you reached level 51 Anomaly research level, a speech balloon will appear at the top of Bahari's head. If you talk to Bahari while in this state, you can unlock A5★.

After talking to Bahari, head to the Level 51 quests. Keep completing while destroying parts or collecting. There is a chance that an A5★ Quest will appear.

Obtain as soon as you complete in multi-play

Once you complete an Anomaly Investigation, the quest of the targeted monster will appear on your list. It will save time if you can go to an A5★ quest with someone who already has.

Keep collecting after obtaining an A5★ quest

After you obtain an A5★ Anomay Investigation, keep trying destroy body parts or collecting in that quest. It helps you to get another A5★ quest.

Clear Quests While Breaking Parts Of The Monsters

Among the three listed above, destroying body parts gives the highest increase in level so it is recommended to hunt monsters with many destroyable body parts such as Lunagaron.

How To Play Anomaly Research Quests?

Click to Enlarge
▲ Upon clearing, a small notification will appear.

You can also obtain Anomaly Investigation Quests by destroying body parts. However, this only happens randomly.

Collect Materials At The Spot Where Qurio Is

You can obtain Afflicted materials and other materials that is useful for Qurious Crafting. You can also obtain Amber Essence and Investigation Coin. The kind of drops depends on the level of the quests so match the level with the type of item that you want to obtain.