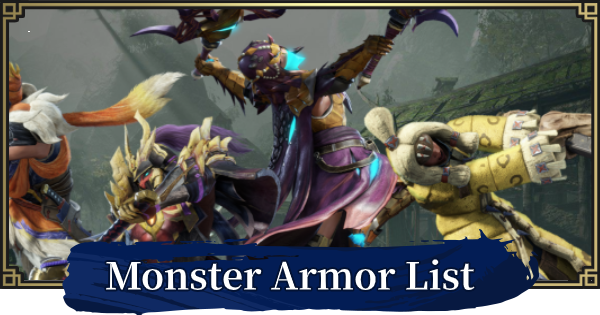 ※ Click or tap the images on the right for details on each armor set.

This section is a work in progress and will be updated once the game releases.

※ The official armor name is not yet known

This section is a work in progress and will be updated once the game releases.

Monster Armor refers to the armor which is uniquely designed based on the appearance of a certain monster. Generally speaking, this armor can be crafted by using the materials which drop when you kill that specific monster.

※ The above set is from MHW: Iceborne

Wearing a certain set crafted from the parts of a monster will often provide you with special effects. These differ depending on the armor piece. We don't have many details about the set bonuses in Monster Hunter Rise, so stay tuned for more updates (or wait patiently until the game releases in late March 2021)!

Armor in this category is crafted, but not using components that drop from killing large monsters. This mainly covers gear crafted with ores, plants, and materials from smaller monsters. This section also includes armor that is not in a "set", but which exists as merely a standalone piece. We are not sure to what extent this type of armor will be featured in Monster Hunter Rise.

※ The above image is from Monster Hunter World

In previous games from the Monster Hunter series, collaboration events with other major game franchises were quite common! These events often featured a way to obtain special armor that made you look like a character from those other games! In MHW alone some of these collab events included games like The Witcher 3, Resident Evil, Street Fighter, & FF14! We're hoping that Monster Hunter Rise will feature events like these as well.