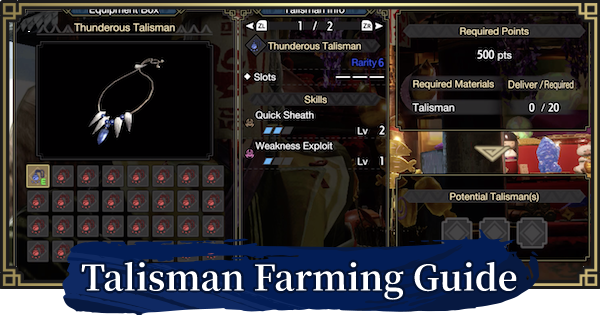 A bug was discovered wherein inputting a specific combination will produce multiple copies of the same Talisman. Capcom Japan has just announced that a fix is on the way for the Melding bug in Update 2.0!

Check Out Details On Update 2.0

How To Farm Talismans (Charms)

For best results, both ★7 Rampage and Narwa quests are recommended. Both quests yield materials that generate a high amount of points needed to meld.

Use Materials To Get Talismans (Charms)

Use The Arena To Pass The Time

Talismans are generated after the completion of a quest, regardless if you succeed or fail. So, take advantage of the Arena Quest 05 as it has a strict fail condition with only 1 faint. Deliberately fail the quest to pass the time and produce the Talismans.

Failing hunting/capture missions always requires you to wait for 60 seconds for the mission to end. Expedition Tours have no clear conditions. With that said, both are inefficient means of passing time.

The last step simply requires you to go get the completed Talismans. If the outcome is not something you want, repeat steps ① to ③ until you get the Talisman with the skill and level that you want.

Skills That Comes With Talisman Are RNG-Based

For melding options "Wisp of Mystery" and "Rebirth", even if you choose the skill that you want, the outcome is always random. Aside from the skill, the level of the Talisman also varies randomly, similar to a "gacha" system.

Check Out How Good Your Talisman Is Using Our Tool!

If the skill that you want is within the first 3 options, select them. As the last 2 options are random, aiming for a single skill may be incredibly difficult given the odds.

How To Unlock Talismans (Charms)

Unlocked After Clearing Village ★5 Or Hub ★2

The Melding Pot can be accessed after you defeat the Village or Hub quest Magnamalo. After fulfilling either, talk to Kagero the Merchant and select "Melding Pot" to start making Talismans (which are also referred to as Charms by some players).

Compared to the Hub version of Magnamalo, the Village quest variant is easier as it has less HP. If you have friends to play with, hunting the Hub Magnamalo may be faster.

Initially you only get the "Reflecting Pool" option on the Melding Pot selection screen. As you progress further and as your level increases, you will get more skill options when creating Talismans. You also get more crafting slots as you complete quests.

How To Unlock Melding Options

Talismans are crafted using the Melding Pot. Initially, you only start with one option to craft Talismans. However, as you increase your Gathering Hall quest rank, you get to unlock more options and skills.