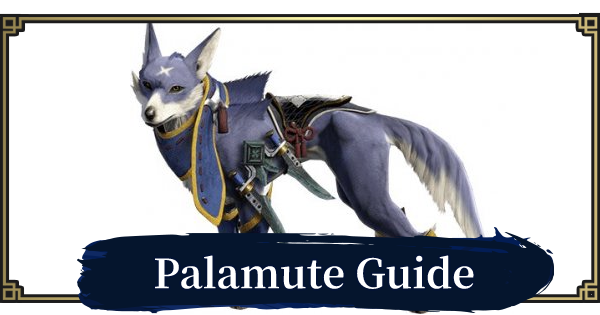 Monster Hunter Rise (Switch) Palamute - Companion Guide is an article about the new companion Palamute! Find out about customization, armor, controls, what you can do, and more!

Check Out The Buddy Guide Here

Mount By Holding The A Button

Mount Via The Action Bar

You can mount a Palamute by holding the A button. Another way is to set the ride function on the Action Bar. By doing so, you'd be able to ride the Palamute even from far away.

Dismount By Pressing The B Button

You may dismount by pressing the B button. If you press B while dashing, you are also able to perform a jumping dismount.

Dash By Holding The R Button

Dash while riding the Palamute by holding the R button. Since the Palamute doesn't consume stamina, you may dash and quickly move around for sustained periods of time. This is useful for when you need to cover a lot of ground.

Accelarate By Drifting With ZL Button

If you press the ZR button to jump as usual while you're dashing and then press the B button to dismount, you'll be able to perform a jumping dismount. This move is useful when you want to jump further away.

Forward Attacks With The X Button

You may make forward attacks by pressing the X button while you're riding a Palamute. A maximum of 3 consecutive attacks may be performed, with the first two attacks moving forward and the last attack in slightly straight line.

Use Some Items With The Y Button

Some items may be used even while riding a Palamute by pressing the Y button as usual. Recovery items like potions may be used without issues, however, please note that some items can't be accessed while riding.

Compared to the Palico, the Palamute is an attack type companion. It will prioritize attacking the monster and behaves differently from the Palico (providing buffs and debuffs).

Attack Even While Mounted

Hunters may perform up to 3 consecutive attacks even while mounted on a Palamute. This is particulary useful with smaller monsters because you may easily attack and move around with a touch of a button.

The Palamute can be ridden to traverse across the map. It is a fast and easy way to get to far away places. Since the hunter is riding on the Palamute, no stamina is consumed when sprinting around.

Some Items May Be Used While Moving

You will be able to use some items while riding the Palamute. Items such as recovery items will be available for use, allowing you to be efficient during long and drawn-out hunts.

Instructions Via The Action Bar

You may give instructions to the Palamute through the action bar. This allows you to mount quickly and climb high terrain that hunters can't access using jumps. As mentionied previously, you may also mount by holding the A button while standing near the Palamute.

Interact With The Palamute!

You may also interact with the Palamute through the action bar. You can pet them, give them a treat, or shake their paws. This fuction doesn't serve any hunting purposes, but it's a wonderful way to take a break!

In Monster Hunter Rise Solo mode, you may bring along any combination of two buddies. You may choose combos of 2 Palamutes, 2 Palicos, or 1 of both.

Check Out The Palico Guide Here!

One Buddy in Multiplayer Gameplay

In Multiplayer mode, you may only bring 1 budy along with you. This is a clear difference between MHW Iceborne wherein you could bring along 4 buddies.

Just like with your hunter, you can customize your Palamute's look. Feel free to design your buddy to your heart's content!

The trailer shows clips of a Palamute holding an umbrella-like item that may allude to it being a special weapon for your buddy to use. In addition, this was a feature in MHW wherein buddies were able to weild special tools that had support boosts, so it may be safe to assume that this could be the case in the new game as well.

Much like Palicoes, it seems that Palamutes may also be able to equip armor. Definitely an exciting new function wherein you can both coordinate your buddy's looks along with boosting their abilities.

It's possible to equip layered armor on your Palamute buddy! It's possible to get one such outfit, the Palamute Retriever, by pre-ordering the game, though more methods will likely be added when the game goes on sale.

By purchasing and scanning the appropriate amiibo, you can obtain another layered armor for the Palamute - this one in the Sinister Seal set. Amiibos are sold separately from the main game.

What Is The Palamute?

The Palamute is a new companion that makes its debut in Monster Hunter Rise! This new companion will allow you to ride around the different locales quickly without consuming stamina!

Palamutes may be hired by talking to Iori who runs the Buddy Scout facility at the village's Buddy Plaza. You can also train here so this is a place that you may end up visiting several times to prep for your battles.