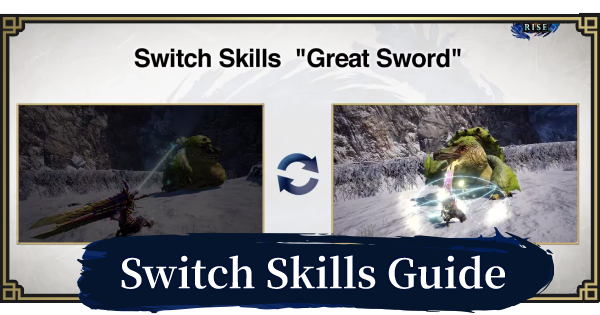 We are currently updating this article based on the latest Monster Hunter Sunbreak: Title 1 Update (Ver. 11) . Stay tune for more information!

This ability can be used by swapping it out with Hunting Edge. This attack will let you fly forward and land a charged slash. Even if you're hit on the way, you won't be knocked back.

This attack can be swapped out for Tackle. You'll use the flat of your blade to charge forward. This ability is a bit slower than a regular tackle, but it also allows you to block and deals a fair amount of damage. If you successfully guard, you'll be able to connect it to True Charge Slash as well as other moves.

This attack can be swapped out for True Charge Slash. Take a stance and then release a powerful attack. In terms of damage, this is weaker than True Charge Slash, but if you get hit during the ability, its attack will go up significantly. You can also freely change directions with this.

Can be swapped out with Step Slash. Fires out two attacks while your weapon is sheathed. This deals more damage than Step Slash, but it has fewer moves it can connect into.

Can be swapped with the Silkbind move Soaring Kick. Move forward, closing the distance from your foe and dealing damage. Places you've struck will take continuous damage after some time. This will also increase your Spirit Gauge by 1 when it hits.

This is a counter ability that uses the shield to do a powerful uppercut. There's a moment when the move starts when you can guard, and if you're successful the attack will hit multiple times and its attack will increase.

Can be swapped out with Head Basher. This attack is multi-hit, making it work very well with elemental weapons.

This move can be swapped out with Advancing Slash. Strike twice while sliding across the ground. After the first hit you'll automatically jump up and connect into the second hit.

Can be swapped out with the Silkbind attack Piercing Bind. Uses the Wirebug to jump up high. It doesn't deal damage, but if you use this move wisely you can maneuver into the air in a variety of situations, even while your weapon is unsheathed!

Can be swapped out with Demon Flurry Rush. Somersault and then swing down to attack. Whne you hit, do a vertical spin and ascend while slashing. It's possible to connect this into into a Midair Spinning Blade Dance. This works well against large monsters, in particular.

Can be swapped out with Demon Mode. This will greatly increase your overall damage compared to regular Demon Mode. You'll also be able to deal damage while dodging as well.

This move can be swapped out with Side Smash. By using this at the right time, you won't take damage from enemy attacks. If you succeed in negating the damage, you'll be able to deal an additional attack.

Can be swapped out with Silkbind Spinning Bludgeon. This will prevent you from being knocked back, making it a great move for advancing, retreating, or setting up for a combo.

Changes your charge attack significantly, letting you be able to connect multiple charge moves together like you would with a Great Sword. The order is generally a swing, uppercut, then a downward swing. By holding each charged attack for longer you can also increase its damage.

Can be swapped out with the Silkbind move Earthshaker. Places a cocoon on the ground using the Wirebug. Melodies you play will also trigger from the cocoon. Additional, the cocoon will deal damage in a wave to enemies near it.

Can be swapped out with Overhead Smash. Swings the Hunting Horn once horizontally and triggers a sonic attack in front of you. This doesn't deal much damage, but can be quite good at stunning enemies.

You can choose to set Melody Mode to either Echo or Performance. Echo mode will let you stock up notes and release them at your desired timing. The main benefit to this is that you won't have to repeatedly use the same note, since you can stockpile them. That being said, this mode is not as easy to use as Performance.

Can be swapped out with the Silkbind attack Anchor Rage. Guard against attacks with your shield and then fly forward with the Wirebug, dealing two swift hits.

Can be swapped out with Dash Attack. Raise your shield and advance forward. It's possible to block damage taken while advancing this way. Hitting a monster will deal blunt damage.

Can be swapped out with Guard. Timing Insta-Block perfectly will let you massively reduce damage taken. The disadvantage however, is that if you don't time this well your overall guard power will decrease.

Fires off an attack behind you and uses that momentum to push you forward. Using this well will give you even more mobility.

Can be swapped out with Hail Cutter. Move forward and slash, all while temporarily increasing your shelling damage dealt.

Can be swapped out with Quick Reload. Protect yourself while reloading your ammo and wyrmstakes. However, this will reload less than a regular reload. This works well with Wide Ammo, given that it already has fewer rounds than usual.

Can be swapped out with the Silkbind attack Invincible Gambit. Using the Wirebug, slice with your sword and rise. from midair, you can perform Forward Slash. If your midair attack hits, your weapon gauge will fill up and you'll deal additional blast damage to the area you hit.

Can be swapped out with Forward Slash. Mvoe forward a great distance swing down your weapon. This move can be hard to hit, but its damage is huge. If you connect Forward Overhead Slash to a sword mode changing move, you can get two hit in.

Can be swapped out with Finishing Discharge. Take a stance that prevents you from being knocked back and then release a flash of elemental energy. This move is not affected by your awakening gauge.

Can be swapped out with the Silkbind attack Counter Peak Performance. Slam your axe in front of you and use recoil and the Wirebug to fly up in the air. When midair, you can use a Super Amped Elemental Discharge as well.

Can be swapped out with Condensed Element Slash. Switches to axe mode after activating the ability, letting you multi-hit until the effect ends. Your axe attacks will charge your phials during this time.

Can be swapped out with Morph Slash. This version prioritizes defense more, as it has a longer window to block attacks. If you successfully guard an attack, the damage of Element Discharge Slash you use afterward will increase.

Can be swapped out with Focus Shot. Use the Wirebug to fly into the air and loose arrows. You can use even stronger attacks while in midair. It's possible to use arrows to deal damage directly below you as well.

Can be swapped out with Power Shot. This deals more damage than a regular Power Shot, but costs more stamina. It also has the possibility of stunning the target.

Can be swapped out with Charging Sidestep. Dodge while letting loose a 2-stage charged attack.

Can be swapped out with Recall Kinsect. Use the Wirebug to propel yourself upwards and do a powerful downward strike. The range on this move is small, but the damage it deals in the area it hits is quite large.

This can be swapped out with Leaping Slash. Attack forward while spinning. If you get attacked while doing this move, you can use the momentum to launch yourself up.

Perform 4 attacks without moving. You can lure in Powder Kinsects using this ability.

Can be swapped out with Fanning Vault. Uses the Wirebug to swiftly move from left to right. Your attacks will also deal more damage temporarily. You can also shoot while maneuvering.

Can be swapped out with Reload. This is a bit slower than a regular reload, but it increases the damage of your elemental ammo.

Can be swapped out with Forward Dodge. Your regular dodge will become a step with this. Additionally, if you attack after evading, your bullet damage will increase.

Can be swapped out with Counter Shot. Use the Wirebug to parry attacks. If you get attacked while defending, the time it takes to charge your charged attacks will temporarily decrease.

Can be swapped out with Melee Attack. This will prevent you from being knocked back. This isn't invulnerability, however, so you will still take damage.

How To Unlock Switch Skills

Talk To Utsushi To Get Quests

Once you've satisfied the above conditions, speak to Utsushi in the Gathering Hub. You should see a speech bubble alerting you of a new quest you can accept. You'll also be able to see this marker appear on the village map as well.

The final step in the process will be to clear the quest that you've gained access to. Note that the conditions for these quests to appear are different for each weapon type!

Check Out All Hub Quests Here

How To Use Switch Skills

Change From The Item Box

Switch Skills can be changed via your item box. Item boxes can be found in various locations across the village, including next to the Village Quest NPC, camps, and the training grounds. This means it's also possible to swap skills mid-quest as well.

Command Inputs Are Usually The Same

In general, Switch Skills will have the same button inputs as the skill you swapped them out for. That being said, the skills themselves can differ drastically, so you'll want to experiment and get to know them before you use them in battle.

Only Certain Sets Of Skills Are Swappable

This feature doesn't let you swap out just any weapon skills - only a specific set of skills for each weapon can be swapped out. For example, the Great Sword can swap out Hunting Edge with Adamant Charge, while the Gunlance can swap out Blast Dash with Charged Shelling.

What Are Switch Skills

A System For Swapping Abilities

The Switch Skill system, as its name implies, allows you to swap out specific abilities and leave others behind. Only some specific sets of abilities can be swapped out, so you can't just swap out every ability you want. That being said, this gives you some room for flexibility and customization in your weapon builds.

Each weapon in Monster Hunter Rise has a total of 3 Switch Skills. It seems that at least one of these swappable skills will be a Silkbind attack. However, note that some Silkbind attacks are fixed and cannot be swapped out. For example, on the Longsword you can swap out Silkbind Sakura Slash with Soaring Kick, but not with Serene Pose.