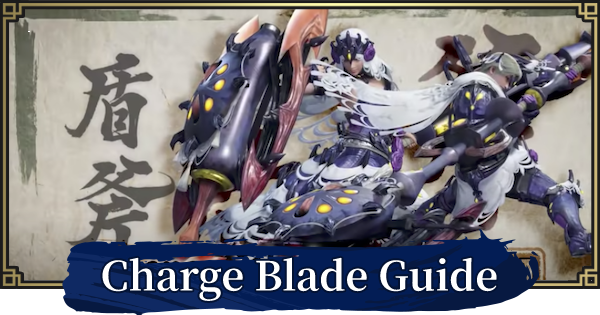 Shield Thrust can be used after any attacks in Sword mode. Get familiar with this move since it is the only move which can be followed up by Amped Element Discharge.

An action that fills phials with Sword Energy which is charged by landing attacks in Sword mode. Since many of the high damaging Axe mode moves consumes these phials, it's important to charge them frequently.

A move which uses phials to Elementally boost your shield. While in Elemental Boost mode, your Element Discharge attacks increase in power.

Amped Element Discharge smashes your axe on the enemy. You can deal additional damage by consuming 1 of your phials. Use it wisely since you'll be invulnerable to enemy's attack while performing this move.

The special move of Charge Blade which can only be used during Elemental Boost status. This move causes an explosion and deals more damage than Amped Element Discharge and will consume all of your phials.

Uses Wirebug to launch you forward while your Charge Blade changes to Axe form. You'll be immune to knockback and stun while this move is active.

Combo For The Beginning Of Combat

Use this combo at the beginning of combat, especially with large monsters, to fully charge your phials and enter Element Boost status. Use Counter Peak Performance after the monster's first attack to fully charge the phials again.

A combo to quickly & fully charge your phial. Use it when you see an opening to attack. You can reduce your recoil time by using step at the end of the combo. If you're having a hard time landing Charged Double Slash, use Spinning Slash instead.

A combo to quickly elementally boost your shield. Since it's a long combo, be ready to stop the combo midway as soon as you notice that the enemy is about to hit you.

A combo that allows for a smooth transition of attacks from Charge into Amped Element Discharge. Aside from avoiding time lags, it also makes it easier to stun your enemy.

The Charge Blade is able create powerful counterattacks with every successful guard. In addition, you can stun and afflict status effects using phials. Being able to utilize phials, as well as having a good balance of offense & defense makes this a notable weapon to use.

In comparison with other weapons, the Charge Axe although powerful, is quite difficult to handle without practice. However, if you get the hang of it, you're sure to be able to attack with strong moves and utilize its powerful Counter Peak Performance.

The Charge Blade is one of the most difficult weapons to operate in the game. Even if you're able to get used to it, its low mobility leaves too many openings for attack. The range of explosion caused by Super Element Discharge also got narrower, making it difficult to land the attack on the enemy.

The Power Axe mode which used to exist in Monster Hunter World can't be used in Monster Hunter Rise. This lowers the Charge Blades' DPS, but you can still deal heavy damage with moves like Element Discharge II.

Rising Slash will no longer launch other players into the air. You can now use this move freely without bothering other hunters.

The range of explosion caused by Super Element Discharge got narrower. You'll need to aim it carefully to fully land the explosive attack on the enemy.

Tips On How To Use Charge Blade

You can fill up your Sword Energy by using attacks in Sword mode. By performing an action called Charging (※), you can fill up phials to use for powerful attacks. If you charge up too much Sword Energy you'll overheat, so make sure you don't overdo it.

※ Note that the action of "Charging" refers to filling up the phials. Do not confuse it with the act of accumulating actual Sword Energy!!

※ The information here is based on Monster Hunter World

Phials can be expended to provide you with a powerful Elemental Boost buff, as well as to perform Elemental Discharge attacks. Always try to have the maximum amount of phials at your disposal.

In the demo we were only able to use Impact Phials, but Charge Blades also have the option of using Element Phials. Impact phials don't deal as much damage, but they are quite versatile. In contrast, Element Phials are extremely powerful against enemy weaknesses. Choose what phial you'll use according to the encounter you're up against.

You can charge Sword Energy to fill your phials by attacking in Sword mode. These will be used when using abilities such as boosting yourself and Elemental Discharge attacks. When you run out of phials, charge them up back by attacking in Sword Mode. This is the basic gameplay loop of the Charge Axe, so get used to it!

Use Phials For Elemental Boost

By using Elemental Boost Spinning Slash, you'll consume all of your phials and become elementally boosted. While in this state, you can perform the highly damaging Super Element Discharge move as well. The more phials you consume, the longer your elemental boost will be.

By performing a Condensed Element Slash during an Elemental Boost, you can enter Sword Boost Mode. In this mode, your attacks won't be deflected and will also gain additional phial damage. You'll want to maintain this buff as long as possible.

You can fill the phials much faster by using Counter Peak Performance. This move works against an enemy's roar, so use it frequently. Note that it's somewhat weak to enemy consecutive attacks.

Axe Mode is the Charge Blade's burst window. Once you've entered Elemental Boost state, find an opening and go into Axe Mode. All Elemental Discharge attacks deal a high amount of damage, but they all use up Phials, so you'll want to make sure you optimize their use.

Super Elemental Discharge is an incredibly powerful attack that expends all of your Phials when used. By using Counter Peak Performance afterward, you can replenish your used up Phials to counterbalance this downside. Even if you take a hit after using it, you can use the Wirebug to recover safely. Try to fire this in a straight line toward the enemy's head or tail.

▲Check out the command input for Super Elemental Discharge here.

By pressing down on the L stick and X while casting Super Element Discharge, you can actually change it over to Amped Elemental Discharge. Doing so will reduce the amount of Phials you use up, so if you feel like you might not thit with the ability, make sure to do this. Amped Discharge is a bit easier to hit with, and can also trigger a stun if you use an Impact Phial.

The Charge Blade possesses a unique feature called Guard Point. When the shield is facing forward during certain attacks, it will block them and allow you to counterattack much faster! You can also link this to an Amped Element Discharge, which is quite handy.

Every time you use Axe: Morph Slash you'll trigger guard point, making it relatively intuitive to use. All other instances of the guard point occur at the end of attacks, but the window of time for it is quite long, so you don't have to have perfect timing to get it off!