Welcome to the bug report forum! If you think you might have found a bug in-game, post it here, detailing what happened! Feel free to post a screenshot as well. 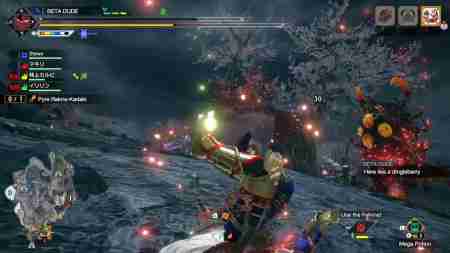 So I had this happen only once, but I noticed that when I died, I still had a little health left. I don’t know if it could have been the healing bat or just a visual glitch?

Some of SFX is missing when I hit monster with great sword the impact sound is gone. Especially, when I hit on the head but another part of the body are fine. Also some of NPC voice line are gone when I interact with them, after I done with them they speak normally.
I have tried the solution set all the volume to 100% and it not work for me.

The market in game no longer has sales. I can’t buy things at the sale price, or buy lottery tickets. I’ve probably done 30-40 missions since the last sale.

>>301
This happens to me occasionally too on the Steam Deck. I have to restart the device and then it works.

When I try to play any of the Narwa or Ibushi quests in high or master rank, the game crashes almost every time. I’m playing on the switch version.

Help!
Beaten Serpent Thunder of goddess can't access the Sun break
Cause the female npc never appear after I beat

Eating for dango booster and never get it at 90% chance.

My friends save disappeared completely for no reason. He's not even the first person this has happend to so what should he do to recover his save? Is there anything that can be done?

>>294
I have been having the same problem as well. Whether it be with my friends or joining in on any sort of quests on the mission board

>>270
Same thing has been happening to me. No matter what I get frenzy, even in the training area. Tried pretty much everything to get it fixed by now, so unfortunately I’ve got no solutions other than sitting around and hoping it’s eventually taken care of in a bug fix.

There is random delay between bowgun shots despite spamming the button

Whenever I get in a lobby, my game keeps disconnecting from it, evento if my and my friends Internet is fine

Event quests not showing, the checking ad ons gives us tmp files on pdlc folder (temporary). im hoping they fix it on TU2

After the quest "Grabbin' Life by the Horns" (Master Utsushi's Follower Quest to hunt a Rajang in the Jungle), when speaking to him in the Gathering Hub he refers to Fugen as 'Fuges'. My assumption here is that this is a spelling error rather than a nickname Utsushi has for the Elder.

The Master rank (M5) question of the elder dragons randomly checks and unchecks. I have completed all 3 (Kushala, Teostra, and Chameleos), but it is a toss up on whether they are marked as completed.

11.0.2 broke my save on the Switch. I spawn in Elgado with no gear and two random buddies each time. No access to even my supply chest, like I’m just starting the game and I’m spawned in a place I shouldn’t be. If I do anything that prompts an auto save, I get booted after an error message. Tried everything from turning the console off, re-downloading save, re-downloading the game to reformatting the memory. No hacks or cheats. Everything was fine before the update.

Slaying the requested afflicted monster has not ticked up the Request Completion Reward counter in three hunts now.