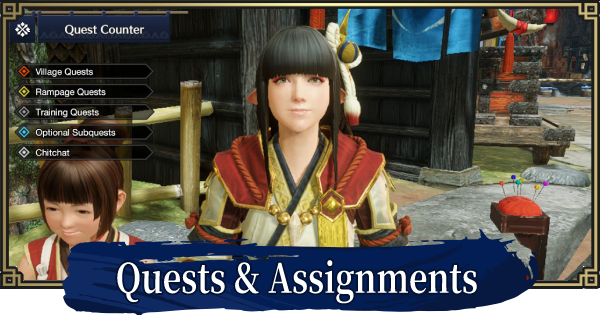 Check out this all Quest List of Monster Hunter Rise. This includes all village & hub main story quests, and requests side quest guides and walkthroughs!!

Village Quests are the Story Quests of Monster Hunter Rise. Completing them is a must to not only progress the story, but to unlock different aspects of the game as well.

Check Out The Village Quests Here

Players can only take multiplayer quests with other players through Hub quests. You can also take solo quests in the Hub if you are in Offline Mode or if you just want to play solo.

There are multiple side quests that can be done in Monster Hunter Rise. They provide different rewards for completing them, including Kamura Points, materials, items, and new unlocks!

Requests are personal quests from NPCs. They are often not as hard to complete, requiring players to simply defeat small monsters, deliver specific materials, take pictures, or something else to clear them.

You can request for 5 types of free side quests at once at the quest counter. You will be rewarded if you talk to the counter after clearing the required conditions. Rewards include armor spheres, which can be used to improve your armor.

Arena quests are quests where players will take on a challenge in the arenas of the game. Here, you cannot bring your own equipment, but would choose from one of the 5 that will be provided.

During Rampage, players will need to defend the village's gates from an incoming monster attack. Make use of the different equipment around the defend area to ensure fend-off Monsters.

Check Out The The Rampage Guide

Required To Unlock Some Quests

Not all quests are available at the start of the game. You will need to complete different conditions and complete other required quests to be able to access all of them.

Similar to previous Monster Hunter games, there are quests you need to complete to remove the rank cap and get access to higher-tiered quests. Complete them as soon as they appear, but beware, since they will be challenging.