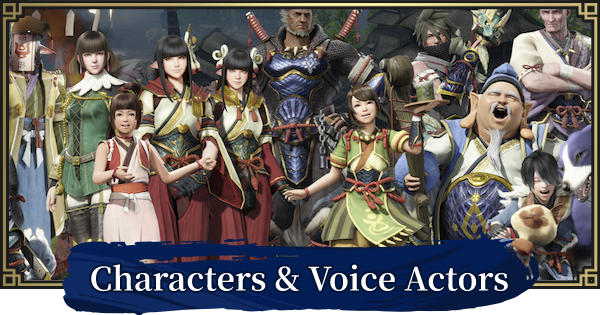 Monster Hunter Rise Sunbreak new Characters and their Voice Actors. Learn about the new ally characters & their VA's, their roles in the new Elgado Outpost, bio & more in Sunbreak!

Meet new allies in the new headquarters, Elgado! This new Outpost is bustling with interesting knights of the Royal Order, researchers, sailors, and traders hired hunters and are home to the research team tasked with looking into the mystery surrounding Malzeno, including other Kingdom monsters. Check them out below to learn more about them!

Knight of the Royal Order Fiorayne

De facto leader of the Knights of the Royal Order. Together with Admiral Galleus, she helps lead the research team's investigations into the mystery surrounding the Kingdom's monsters. Imbued with a strong sense of responsibility and a penchant for over-seriousness, she is known to occasionally resort to heavy-handed measures to accomplish her mission.

The Wyverian lead scientist of the research team at Elgado Outpost. Hailed as a genius by everyone in the Kingdom for his sharp, analytical mind, which has puzzled out the solutions to countless scientific enigmas. On the other hand, he is also known to be rather eccentric. Once something has captured his interest, he becomes blind to everything else—sometimes leading to reckless behavior.

Elgado Outpost's one and only quest receptionist. Though it's her first time performing the official duties of a quest receptionist, her diligence towards her work have made her a beacon of strength for the knights stationed there. In fact, even the Admiral and Fiorayne seem to show her deference. What might she be hiding?

Operator of Elgado Outpost's Smithy. She's young, but possesses the expertise befitting her position as one of the Kingdom's blacksmiths. Through Rondine's good graces, she has come to Kamura Village to further her craft by learning from Hamon the Blacksmith. Minayle loves her work and everything to do with weapons and armor, and bangs out each task while gripping her mighty hammer!

A Wyverian who runs the market in Elgado. Though usually calm and composed, he sometimes lets his merchant duties get the better of him. He boasts an impressive knowledge of items and other fields, which his inquisitive mind pushes him constantly to expand, usually through his love of reading.

A man who trains the Knights of the Royal Order. He can be a little coarse and works his students extremely hard, but he's a big-hearted and caring father figure who has everyone's respect. Admiral Galleus has been a friend of his since childhood, and despite their very contrasting personality, they get along well.

A knight of the Royal Order stationed in Elgado. Bright and cheerful, he's also a little impulsive, often choosing to act before he thinks. He loves working out, never missing his daily physical training. He's also obsessed with Admiral Galleus, to the point of secretly copying his hairstyle.

A knight of the Royal Order stationed in Elgado. Ever calm, she rarely shows emotion, and no one in the Outpost has ever even seen the corners of her mouth curl upwards. Being serious and hard-working, she has a profound knowledge of history and of monsters. She's said to be a fine hunter, though for some reason others shun the chance to hunt with her...

A Wyverian doctor whose name is known far and wide. After a certain incident, he travels to Elgado to provide his knowledge and experience as a doctor to help the knights fight the calamity.

Click To View The Previously Added Characters In MH Rise