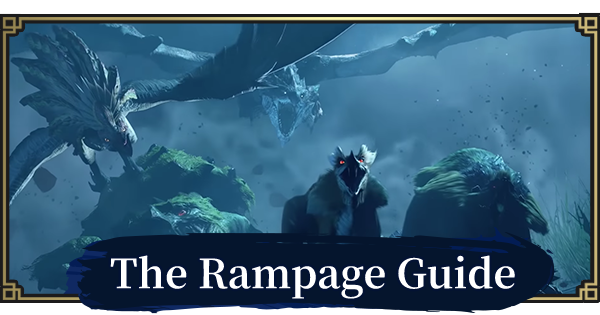 The Rampage for Monster Hunter Rise (Switch) is a guide on the latest info on The Rampage, Kamura Village, the monsters, gameplay, rewards, weapons, equipment and more in MH Rise!!

What Is The Rampage In MH Rise?

The Disaster In Kamura Village

The Rampage is a quest type battle to defend Kamura Village against a large horde of monsters.

A Large Part Of The Story

The Rampage plays a big part of the story in Monster Hunter Rise. It's when Kamura Village was ravaged by several monsters and sustained a great level of damage. MH Rise's main monster, Magnamalo, is also presumed to play a large role in The Rampage.

Check Out The Magnamalo Guide

The Rampage quest is centered on the "Stronghold." This is where you'll set your equipment and prepare hunting installations to increase your chances of winning the battle.

*Based on the details of the 3/8 Digital Event

The flow of The Rampage consist of intercepting the hordes of monsters that invade the village by utilizing the Hunting Installations. The hordes come in waves, and the time is fixed for each. The basic principle is that you prevent the monsters from invading the village for each wave.

Aside from the main goal, you're also able to take and complete sub-missions. If you clear a sub-mission, you get to keep the spoils of the mission even if you fail to accomplish the main quest's goal. Doing these sub-missions will also strengthen the stronghold, so aim to do a few throughout the quest.

Installations May Be Exchanged

Even if you place a Hunting Installation previously, you'll be able to exchange it with something else by removing it. As your Stronghold level increases, new Installations will be released, so make sure to exchange them as needed.

If by any chance that during your prep time you find that you're done and want to skip to the battle, you can hold the R stick. By doing so, you can cut the time to start with battling the hordes immediately.

Use the Hunting Installations you prepared to intercept the arriving monsters. Your first and most important priority is to protect the barrier. If the monsters are able to get closer to the Stronghold, it would get increasingly difficult to fight them off.

Signal For Hunters To Attack

When the signal for counterattack is given, the attack power of hunters increases significantly. This is the perfect time to attack directly with weapons.

The Gong Hunting Installation enables the Counterattack Signal to be activated any time. However, note that the time is shorter compared to the one that happens naturally throughout the quest. The Gong's ability to raise attack power increases with the Stronghold level so make sure to utilize this when the Apex Monsters appear.

Once you successfully intercept the 1st Horde, aim to do the same with the 2nd horde because the flow will be the same. The only time it will change is when the 3rd Horde come sand a large-scale battle will occur where Apex Monsters will appear.

④ Complete The Quest By Repelling All Hordes

If you successfully intercept all hordes from invading the village, you succeed in the quest. Either you do that or you defeat the main Apex Monsters.

*Based on the details of the 3/8 Digital Event

A time is set during which the hordes will come and you'll need to fight them off. Protect the Stronghold until the time limit, or defeat the Apex Monster leading the horde to intercept the whole group.

The Stronghold has 2 barriers, and if this final barrier gets breached, you will fail the quest. Note that if you complete at least one sub-mission, you get to keep the rewards. However, the spoils of the game will obviously be less than if you succeed in completing the main quest.

Hordes Will Come in 3 Waves

The Rampage is a battle to prevent hordes of monsters from invading the village. The hordes will come in 3 groups and will increase with each wave and will have a main, leading monster for each group.

The Rampage has several types of monsters with the main differences being those that mainly attack hunters or barriers. Aside from that, there are those that have golden borders that signify the horde leaders and Apex Monsters.

You're given 2 minutes to prep before the hordes come in. Make sure to place as much Hunting Installations as possible during this time. Prep time will also be given even before the 2nd and 3rd hordes.

There are mainly 2 areas wherein monsters may come in to destroy the Stronghold, and so it's necessary to place Hunting Installations for both. This is especially important during the 3rd Horde when the Apex Monsters are set to appear.

Kamura Village characters (NPCs) may also be requested to join the battle through a Hunting Installation. The trailer showed only Hinoa and Minoto, but much like the other installations, more characters are introduced to battle for you as your Stronghold Level rises.

Wyvern Riding is also possible during the Rampage. The keys here are to choose your timing well and to pick the strongest monsters to ride in order to make defending the village easier.

Check Out The Wyvern Riding Guide

Monsters During The Rampage In MH Rise

Monsters Appearing Regardless Of Habitat

The trailer showed us Rajang and Diablos who were uncharacteristically in the area despite their usual habitats. With that, it's safe to assume that all sorts of monsters will come despite their usual ecology and areas. There's also a possibility that ancient dragons may appear.

There will be larger monsters that will be leading the hordes and it seems that they are larger than their usual types. It seems that it's a goal of this quest to repel these large monsters.

The Rampage features really powerful monsters called Apex Monsters. They seem to only appear via the 3rd Horde of the Rampage. Handling them would be similar to the large monsters, however, they're expected to be so much stronger.