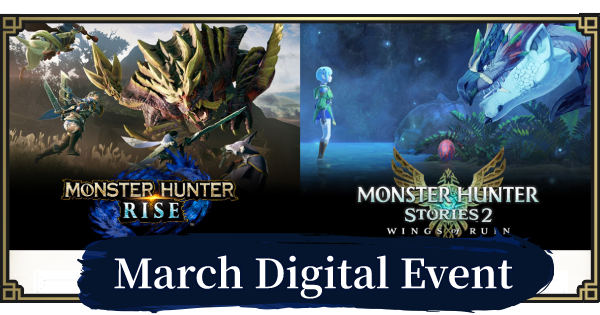 The Digital Event (March 8) Summary in Monster Hunter Rise (Switch) is a guide on the event on March 8th. Find out about the new monsters, locales, actions & more in MH Rise!!

This article is a work in progress - stay tuned for updates!

Consecutive events in March have been announced on Capcom's Official Website! March 8, 2021 is particularly eyed for majority of the game's new announcements, so make sure to tune in!

Learn More About The Rampage

One of the most exciting news from the March 8 digital event is the announcement of Monster Hunter Rise Demo Version2 that will be available from March 11 (PST/EST)!

How To Get New Demo

If you haven't already downloaded the demo, simply download the demo on your Nintendo Switch and you'll find all the past and new quests. If you already have the Version 1 of the demo released last January, simply update your game to have the new quest added to your software.

The version 2 of the demo features a new quest called "Slay Magnamalo" where you can try your hand at defeating MH Rise's main monster! The demo will have fixed armor but of course you're free to customize in the actual game.

Check Out The Magnamalo Guide Here

The newest monster announced to be a part of MH Rise is Nargacuga! It's a flying wyvern monster known to inhabit forests and highlands. It descended into the village during the Rampage and wreaked havoc along with all the other monsters that invaded the territory.

Another new monster announced in the March 8 digital event is Chameleos, an elder dragon that first appeared in Monster Hunter 2. Known for its long and elastic tongue as well as its poison attacks, it's truly a force to be reckoned with.

MH Rise Final Boss May Be An Amatsu Look-Alike

The 5th trailer for MH Rise highlighted during the March 8 Digital Event showed a mysterious monster at the very end of the scene. The monster's appearance look different from usual monsters, leading us to believe that it's an ancient wyvern. The final boss of Monster Hunter 3G called Dire Miralis was also given a preview at the end of its trailers, and given how this monster was shown for MH Rise, there's a big chance that this monster is the final boss.

Zinogre was featured once again in the 5th trailer along with several other monsters that were previously confirmed in earlier trailers.

The newest and arguably most exciting feature of MH Rise is the ability to switch between Silkbind attacks as you can see on the image above!

Although we've seen plenty of new exciting wirebug moves so far, it seems that there will be even more for us to discover in the following days leading up to the release of the game. Stay tuned for new info!

Learn How To Use Wirebug

Join Quests With Friends Or Randomly

You can use "Join Requests" to play with other gamers in MH Rise online. You may also find other hunters with similar playing styles and join them on their quests. Up to 4 players can play at once.

The difficulty of the quest will vary depending on how many people are in the game and will change as players come and go.

If by any chance that you liked your playing experience with certain hunters in a quest, you'll be given an option to "like" them at the end of the quest. If the "like" was mutual, the software will make it easier for you to be able to match with them again in future games.

More info on the Rampage was given in the March 8 digital event! It appears that you'll be able to prepare your defenses ahead of time before the monsters come in hordes. This is key in protecting the village. "Counter Signal" increases the attack of hunters, so take note when this mode is activated. The goal is to defend the stronghold and fend off the monsters.

Check Out The Rampage Guide

The new screenshot photo feature shows the name of the creature that you are photographed with. Photos may be viewed on your Nintendo Switch as usual.

The March 8 digital event also showed the trailer of Monster Hunter Stories 2: Wings Of Ruin. This game will be released on July 9, 2021 and features graphics that deviate from the usual Monster Hunter series' style.

A special digital event showcasing new features in Monster Hunter aired on January 7th 2021! We've compiled an overview of its contents for you to check out below!

Vod Of The Event

You can also check out a video of the entire event for yourself here!