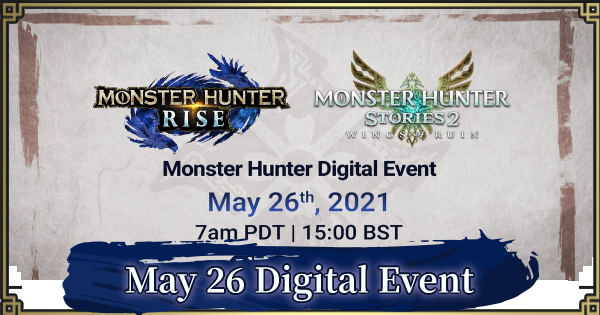 Big announcements will be expected on the upcoming MH Digital Event on May 26, 2021. Get to know the summary, schedule, 3.0 Update details, new monsters, ending, & where to watch!!

Version 3.0 of MH Rise has officially been announced and confirmed to come out at the May 27, 2021! So stay tuned to Monster Hunter Official Site for the release date!

Crimson Glow Valstrax, a new elder dragon, will be added to the game in Update 3.0. It's a variant of Valstrax and can freely fly through the sky as it changes the shape of its wings.

Apex Zinogre has been announced to appear in the 3.0 Update. You can differentiate it from its original variant by how it glows a golden light.

Although an Apex monster, it will not only appear in Rampage Quests but also in Standard Quests as well. This will make gathering materials so much easier.

The new ending involves both the Wind Serpent Ibushi & Thunder Serpent Narwa. Players haven't had the chance to play these two monsters together in one battle, and it seems that the new ending will bring that opportunity for everyone to try their hand at.

Linked To The Twins

The trailer shows the twins Hinoa and Minoto acting strange as if possessed by some unseen entity. This alludes to how they may play a part in the battle with the two serpents.

We can still look forward to new Event Quests, DLCs, and exciting new collaborations in the future! Check out details on the collab below.

Check Out The Capcom Collab

New exciting DLCs will be available for purchase as seen in the table above. There will be plenty of new hunter voices & layered armor for you to try, so do check them out!

We'll be seeing a new type of game in the Monster Hunter series through its newest game: Monster Hunter Stories 2: Wings Of Ruin. It was released on July 9, 2021.

Tune in for details on #MHRise Update Ver. 3.0 and the latest news on #MHStories2.

Where To Watch The Event