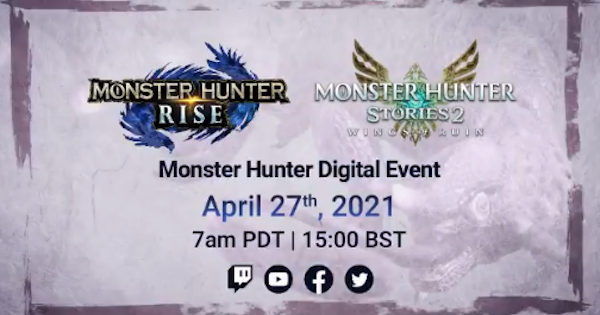 Big announcements are expected on the upcoming MH Digital Event on April 27. Get to know the time and schedule, update 2.0 details, new content & DLC, & where to watch!!

Check Out The Details On Update 2.0

Version 3.0 of MH Rise has officially been announced and confirmed to come out at the end of May 2021!

Teostra is an elder dragon that was quite popular in the previous games. We're glad to see it make a reappearance in MH Rise!

The Teostra armor brings with it a striking red color with golden accents as seen above.

Kushala Daora, a troublesome monster to deal with in previous games, has also been announced to appear in MH Rise.

The Kushala Daora boasts a brassy blue-violet tinge reminiscent of the monster it was forged from.

Chameleos has been long thought to be a part of MH Rise, and now we'll finally get to see it in action!

The Chameleos armor highlights the same violet and beige color themes that its monster is known for.

Diablos, a ferocious monster in its own right, has become even stronger as an Apex! We look forward to being able to challenge this monster not just in Rampage Quests but in regular quests as well!

Apex Rathalos is another new Apex Monster introduced in the Ver 2.0 of MH Rise. It's sure to be a fierce battle in both Rampage Quests and regular quests alike.

Apex monsters used to only be available in Rampage Quests, but now you may try your hand at hunting them on standard quests!

In 2.0, your HR rank will be adjusted according to the Hub Quests you've completed. After unlocking the HR Cap this way, you'll be able to earn HR points to level up.

Check Out How To Unlock Hunter Rank

Check Out Details Of New DLCs

A bug was discovered wherein inputting a specific combination will produce multiple copies of the same Talisman. Capcom Japan has just announced that a fix is on the way for the Melding bug in Update 2.0!

Check Out The Talisman (Charm) Guide

Monster Hunter Digital Event - April 2021 is coming up next week!

Tune in for news on the first free #MHRise update (Ver. 2.0), feat. Chameleos, Apex Rathalos and much more, as well as the latest info on #MHStories2.

Where To Watch The Event