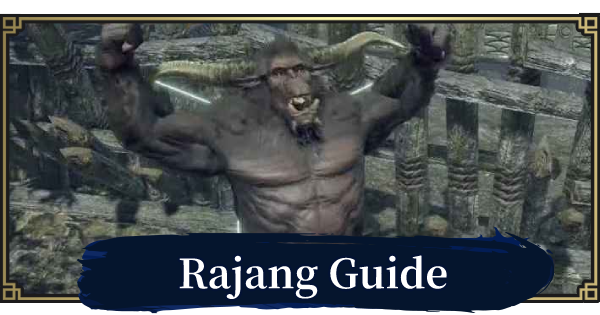 One of Rajang's most prominent features is that it becomes gold when enraged. Aside from its power and aggressiveness, Rajang also boasts unparalleled speed. Although a fanged beast, its strength can be likened to ancient dragons.

Rajang can only be fought as a high-rank hub-only quest. You need to advance to HR7 in the hub to unlock it.

Important! Effectiveness of traps vary depending on Rajang's state. Check the table here to know more.

Rajang - How To Fight

Getting hit by Rajang's thunder attacks can inflict you with Thunderblight, increasing your chances of getting stunned or paralyzed. Bring and use Nulberrys or wear armors with Blight Resistance to counter Thunderblight.

Rajang mainly uses its upper body to attack and deal damage. It does not have a lot of attacks to deal with threats from the back. Aim to position yourself behind Rajang to efficiently deal damage.

Depending on Rajang's state, traps may become ineffective. Pitfall Traps are ineffective when it is not enraged and Rajang can destroy Shock Traps when super engraged. Remember this when thinking of disabling or capturing Rajang.

Keep An Eye Out For Rajang's Aerial Attack

When in Super Rage mode, Rajang can use an aerial crush attack using its wide arms to cover a wide range. Check its trajectory and adjust your movement to evade the damaging attack. Also, getting hit by this attack completely locks off Wirefall, leaving you open to further attacks.

Dodge The Breath Attack By Going To The Side

Rajang fires a wide beam from its mouth, devastating anything in its path. As the beam always travels in a straight line, move around Rajang when attacking so you can easily dodge to the sides. Also, the range of this attack is incredibly long, so always watch out for Rajang's position during the battle.

Roll Forward To Evade The Lariat

Rajang uses its wide arms to attack while moving forward, tracking the player's movements. While you can Wirebug away to safety, you can also roll forward to Rajang's lower body to counterattack.

Use Wirebug To Escape The Downward Punch

One of Rajang's most dangerous attacks, this combo sends players flying and immobilizing them for a few seconds. Afterwards, Rajang comes in for a downward punch to finish the job. You can dodge this attack by using Wirebug to get away from Rajang. It is highly recommended that you always store 1 Wirebug charge in case you find yourself in this position.