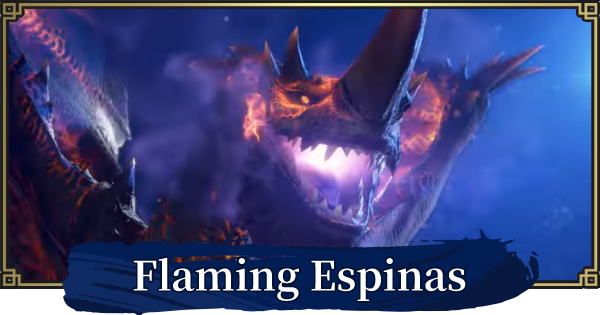 It is announced that Flaming Espinas will appear on the Free Title Update 2 this late September! It appears in the trailer that it is fighting against Teostra in Forlon Arena.

More Information To Be Announced On TGS 2022

Tokyo Game Show will be broadcast on September 15th (Thursday) and Monster Hunter Rise: Sunbreak updates will be released on the same program. In the trailer, there was a hint of actual footage of the monsters that appeared in the second update, and there was also a statement that there are several other monsters to be released on the update.

Charged Attacks May Cause Instant Death

▲Megaflare-like motion is noticeable in the trailer

Flaming Espinas two types of charging attacks: "Charge Tackle" and "Mega Flare". Both boast despairing power and are characterized by extremely long charging movements that envelop them in a purple aura. In addition, in "MHF", if you set a sickness trap while charging, it will immediately release a charging attack, so its use was strictly prohibited.

Mega Flare Is The Strongest Move

Among the charged attacks, Mega Flare can be said to be a big move. Released after a charging motion that lifts the upper body, it has tremendous power and range. There is no way to resist within range, so I have no choice but to run away. In addition, there are various enhanced individuals in "MHF", and the types of mega flares have increased depending on the individual.

▲Breat attack in the trailer looks like a regular fire breath.

The Breath of the Flaming Espinat in "MHF" was a combination of poison and strong acid. If hit, players will be in Poison + Defense Down state. Since it does not paralyze, there is no follow-up attack, but in the Master Rank where the damage is high, defense down is a threat that leads to instant death.