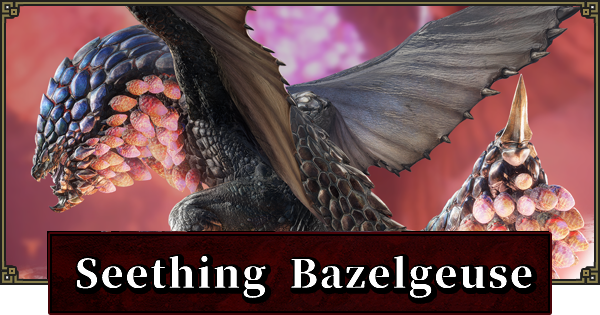 Coming In The First Major Update!

The Seething Bazelgeuse, as the name suggests, is a variant of Bazelgeuse. It will be added in the first major update in August. The explosive scales are more powerful and has a powered-up state where its scales glow purple-hot before it unleashes a powerful blast.

Bazelgeuse - How To Unlock & Weakness

Scatter Explosive Scales Over A Wider Area Than Normal Species

The Seething Bazelgeuse has further developed its explosive down its neck and tail to disperse its explosive scales, but it does so over a wider area than the normal species. Its not safe at a certain distance as the explosive scales on its feet are quite modest but it's easier to fight at a close range.

Be Careful If The Scales Glow Purple

Over time, the scales on the head and tail of the Seething Bazelgeuse glow purple. When this happens, the explosive scales it has flung that have fallen to the ground glow before it blows up afterward. Since these scales get scattered over a wide area, you might be forced to run around them depending on the position to avoid getting damaged.

Take It Down By Attacking The Light Emitting Parts

As damage accumulates on the glowing head and tail, the Seething Bazelgeuse goes down. Furthermore, all the explosive scales on its body will disappear as soon as the luminescence disappears. Once you get used to it, aim aggressively.