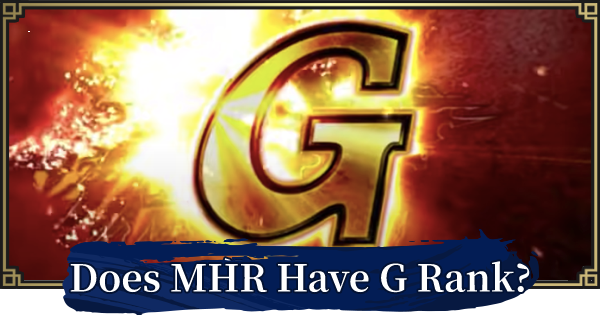 Does Monster Hunter Rise (Switch) have G rank? G rank will most likely not be immediately available in MH Rise. What is G rank? Find out more about difficulty, rank & master rank!

Will There Be G Rank In Monster Hunter Rise?

Most Likely Not Included

It's been a tradition in the Monster Hunter franchise to add a "G" to the name of a title for its sequel. This nuance is lost in the English translation, as the titles are often completely changed. However, this "G" referred to an increased difficulty level. For this reason, we think Monster Hunter Rise won't have a G rank, but we do think it's possible to see that rank in a potential sequel - perhaps one named Monster Hunter Rise G?

Iceborne Did Not Have A "G"

Monster Hunter World's sequel title ("Iceborne") notably did not add a G and follow the above mentioned pattern. A higher difficulty rank did exist, though it was called the "Master" rank.

What Is G Rank?

Each quest in Monster Hunter games has an assigned rank to it. G Rank is generally the highest rank you can find. With some exceptions (like Frontier), ranks generally go from Low-rank -> High-rank -> G-rank.

Hunters also have a separate rank called, unsurprisingly, a Hunter Rank. The higher your rank, the more difficult quests you could get. In Frontier, "GR" took the place of the usual G Rank.

In Monster Hunter World, the most recent entry in the franchise, G rank was renamed to Master Rank. however, the only thing that changed was the rank name - everything else is basically the same as G rank.

The higher your rank, the more powerful monsters will become. Their HP, attack, and defense will all rise, and some monsters will likely even be able to one shot you with a single attack. The materials you can get from these high rank monsters, however, will be extremely high in quality and can be used to make incredible gear.

Some Monsters Have G Rank Only Moves

G Rank's effects aren't just limited to numerical buffs to HP and attack. Some monsters will use new, special abilities only at G Rank! Also, some monsters might be even more resistant to traps and other items.

Some Monsters Only Spawn At G Rank

Some monsters, including last bosses, hidden monsters, and special variants, only spawn on G rank. Some of these might even be massive versions of existing monsters with their own map!

There are also some maps which only unlock after you reach G Rank! In MHW, the Tundra area was only accessible on Master Rank difficulty, and it featured new monsters and variants of other monsters.