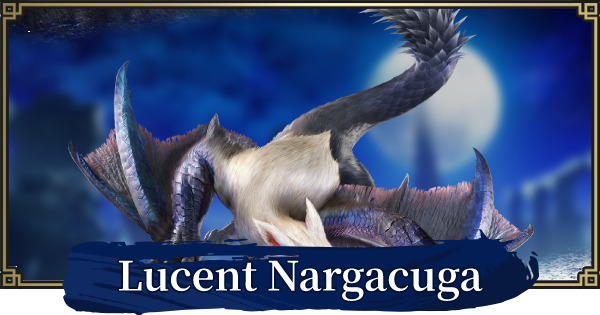 When you clear a rare species, Gold Rathian & Silver Rathalos, you will receive a balloon coming from Arlow when you talk to him. An emergency quest will unlock the rare species Lucent Nargacuga. You can challenge this creature from MR10.

Obtained From The Master

Predict Their Movement Before Disappearing

After Lucent Nargacuga disappears, it will launch a variety of attacks. You can easily predict their movements just before they disappear, so do not panic and watch them carefully. You can easily notice it while it is transparent, as it will be scattering dust in your direction, and when it is angry, the afterglow of its eyes will stay.

If The Tail Stands It Will Do A Poison Attack

Once its tail stiffen upwards, it will conduct poisonous spines and it also spreads by its tail slapping. Accumulating the damage towards the tail will destroy the poison thorns and block its attacks. This strategy will make it easier for you to defeat the monster, so during this time attack Lucent Nargacuga.

An Additional Attack Movement When Its Health Drops

As its strength decreases, their transparent attacks become more varied. They become more agile and will unleash their biggest moves, so don't attack them by force. It is much better to fight carefully and wait for their rage to subside.

Scared At Sound Bombs When Not Hostile

If you throw a sound bomb at the Lucent Nargacuga when it is not angry, it will be frightened which will give you an opening to attack it. However, whenever the timing is difficult, and you use it when the creature is transparent, it will become angrier, so it is not a recommended method to be used aggressively.

Lucent Nargacuga - How To Fight

Back Off Once It Steps Backward

Once the Lucent Nargacuga steps backward while disappearing, it will start attacking you using its tail that will wipe you off. It can be avoided by stepping backward at the time the creature will do a backstep. Note that the tail-slap will follow the backstep when the animal's strength is lowered.

After it roars aggressively, a spinning attack will follow. You can easily avoid it by following the Lucent Nargacuga with your eyes to check its path, the moving away from the path.

When The Tail Swing It Will Shoot Out Poisonous Thorns

When its tail swings while deploying its venomous spines, a rain of venomous spines will fall from the sky. They will rain down three times while expanding their range, much better to keep your distance. You can also approach it in advance, making it a chance to attack.

Once It Disappears, Its Tail Will Hit You

Once it glares at you, it will start disappearing while slowly walking away, surprising you with a tail whip attack. Notice that its eyes will glow before it hits you. In order to avoid this attack, withdraw your weapon and start moving farther from the creature.

Once The HP Is Low, It Makes A Powerful Attack

When Lucent Nargacuga's HP decreases, it will make a powerful attack. It will repeatedly move while in a transparent state and continuously whip its tail. You can avoid this by keeping your distance far from the creature. Keep your distance and try to catch the afterglow of its eyes and the dust on your screen. Locked your sight to the creature so you can easily dodge its attacks.