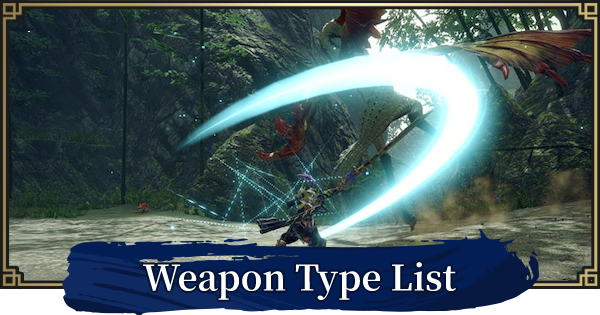 All Weapon Types List & Silk Bind Attacks in Monster Hunter Rise Sunbreak is a guide on silk attacks, silk binds for all weapon types, how to use them, and changes in MHR Sunbreak!

New Moves Of All Weapons

A technique that uses Ironsilk to reinforce both your arms and weapon temporarily to fend off attacks. If used while charging, you can quickly parry an attack and then unleash a fierce onslaught afterwards.

This is an offensive style that combines speed with the weight of the weapon to unleash a stream of powerful slashes. Proper footwork is required, but allows for a large number of combos.

A move that casts out an Ironsilk ring that narrows your range of attack, but boosts spirit so you can go on the offensive. Within the ring, your Spirit Gauge won't deplete, and if you perform any counter attacks, it will add additional hits.

A slow methodical movement that can be executed following an attack.Upon sheathing your weapon, you can harness the increased spirit to unleash a follow-up slash. The power of the slash increases according to the level of the Spirit Gauge. If you are attacked before you have finished with the sheathing, it will consume one level of Spirit Gauge and the move will be canceled.

Uses a Wirebug to cover your blade with a special ointment whose effects trigger if ignited by friction with your shield. While active, monsters flinch more easily, creating more openings for attack.

A two-part attack that opens with a circular slash and follows up with a blade thrust. An easy attack to get multiple hits in with, so ideal for weapons with high elemental and status properties.

A Silkbind attack that launches you spiraling forwards. Once your attack connects, your body acts as a drill as your blades bore into your target's flesh. Note: You can also perform a Spiral Slash midair.

Float like a butterfly, sting like a bee. This technique allows you to attack while evading, and if you work it into your combos, you can unleash a relentless attack that's difficult to defend against.

A Silkbind attack that wraps your weapon in Ironsilk. For a short period of time, any charged attack performed causes the silk to vibrate, creating a shockwave that makes it easier to flinch monsters.

A technique that stores released power and funnels it into the next Charge Switch attac. Power is built up when performing a Spinning Bludgeon. The charge level is then maintained when executing a Charge Switch. Make good use of this to unleash a series of level 3 charged attacks.

A Silkbind attack that wraps your weapon in Ironsilk. For a short period of time, any attack performed causes the silk to vibrate, creating a time-delayed shockwave that triggers additional hits. These additional hits do major stun, exhaust, and part damage.

A two-hit attack that can be delivered from either the left or right. This allows you to quickly shift directions, making it useful for repositioning.

A technique where a Wirebug launches you high into the air. Thrust your lance towards the heavens and then pierce the earth. The falling portion of the attack inflicts multiple hits.

A technique where you charge forward with your shield raised. You can also follow up with a variety of thrusting attacks. Watch for an opening and then unleash an unrelenting series of attacks.

Uses a Wirebug to Blast Dash toward your target, unleashing everything with abandon. Be careful: Shells, Wyrmstake Cannon, and Wyvern's Fire will automatically be reloaded first before performing the attack.

This technique involves firing an exploding stake into your target. When using the Eruption Cannon, the tip of the gunlance heats up and slashing attacks are enhanced for a certain period of time.

Compresses Switch Gauge energy, that can be released as an Elemental Burst. If the burst is released right as a monster attacks, you'll perform a Power Finisher and your switch axe will go into an Amped State.

During this combo, the power of Sword Mode attacks increase and Axe Mode attacks fill the Switch Gauge faster.

A Silkbind maneuver that binds sword and axe together with Ironsilk. After guarding, a heavy knockback leaves you in Sword Mode, and lowers your guard reaction so you're able to chain sword/axe attacks.

Fires an arrow loaded with Ironsilk. If the follow-up arrow lands in the same spot as the first, Ironsilk winds around both arrows, inflicting severing damage. If the second arrow is off target, the lodged arrow disappears.

An attack that thrusts an explosive stake into your target. The stake reacts to follow-up attacks, dealing extra damage to the target. The amount of extra damage dealt is determined by type of arrow loosed.

A technique where you hurl a Kinsect to inflict massive damage. All extracts are consumed and the more extract you have, the more potent this attack will be. After launching the Kinsect, you'll close in using a Wirebug; simultaneously absorbing extract, marking the target, and then chaining into a Vaulting Dance.

A mid-air technique where you thrust forward with your glaive and Kinsect. If the slash connects, you'll perform a Vaulting Dance, absorbing extract. However, once you've absorbed red extract with Kinsect Slash, you won't be able to absorb any other extract with it, but you'll be able to perform an Enhanced Insect Spiker as a trade-off.

An urgent retreat that fires a shot with massive recoil, using a Wirebug to stop. While not a powerful attack, its true value comes when it's used to evade incoming attacks. If timed right, you'll retreat with an explosive exit that can even neutralize breath attacks.

A special shooting style that further raises damage output but narrows critical distance and increases recoil. Because the distance at which the power of ammo is most effective has been reduced, you will need to be aware and adjust your firing position. Note: Does not apply to certain ammo types.

A Silkbind technique in which a Wirebug generates a ring of Ironsilk. Special powder accumulates within the ring, and when ammo passes through it, the velocity of the ammo is decreased. Firing piercing ammo/multi-hit ammo through the ring will boost the total number of hits upon impact.

A style of shooting that utilizes a special stance to reduce recoil. In exchange for not being able to move, you're able to fire in rapid succession. The longer you fire, the shorter the firing interval becomes, but at the risk of overheating your bowgun. If your bowgun overheats, it can't be fired until it has cooled down. Note: Certain ammo types cannot be used.

How To Use Wirebug In MH Rise

Different Buttons For Blademaster And Gunner

Blademasters and Gunners will operate differently as seen above. The common point here is that they may only be used while the weapon is unsheathed.

"Switch Skills" is the new feature of Monster Hunter Rise announced during the March 8 Digital Event. This move allows hunters to swap certain Silk bind attacks for another and can be very useful when certain moves are too difficult to perform.