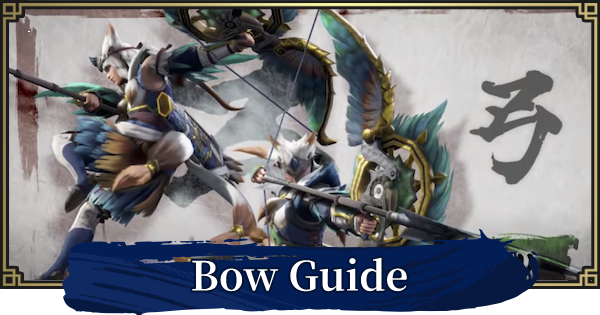 The Bow's new Silkbind ability Aerial Aim has the potential to do a huge amount of damage in a short amount of time. If you can manage to land it on an enemy's weak point, it can deal massive burst damage rivaling that of a Greatsword.

Movement speed with the bow out is quite high, and you can also use Charging Step or Dodgebolt to evade enemy attacks while attacking. Also, as mentioned previously, Aerial Aim's damage is just too good to pass up.

Can Support Allies Too

Using Arc Shot can provide an affinity buff for your party members. The Bow is a weapon that can shine in both solo and multiplayer!

Can Be Hard To Manage Stamina & Range

Using Charging Step and Dodgebolt tends to eat up your stamina rather quickly. Playing with the Bow will require you to stay constantly aware of your stamina - this makes the skill Constitution very necessary. In addition to this, you'll also have to manage your range in relation to your target to ensure you're maximizing your DPS.

Arc Shot is a powerful ability with 3 different supportive effects. Every Bow will have one of these different effects. This should be used whenever you get a chance, as it provides a powerful not only to you but also to your party members!

Just like regular Power Shot (which this ability can be swapped out for), you'll charge up an attack and loose it to deal damage. This version will deal more damage however, and will have a chance to stun if it hits an enemy's head. Additionally, this ability will use up more stamina.

Power Shot is the regular version of Absolute Power Shot. After shooting, you can use this move again to unleash more arrows.

Charging Step is one of the Bow's best moves. It will allow you to deal damage and dodge at the same time, raising your charge level by one stage. If it's already at the max, it will refresh it. Stand in the ideal range while firing this ability off to manage your charge level to maximize your Bow dps.

Focus Shot will let you jump back and regenerate stamina while crouching. You can negate damage taken for a moment after inputting this command. You can choose which direction you move in by adjusting the left stick.

Fire off a vertical arrow, shooting two more after it. This will be affected by your charge level, so it's best to use it right after a Shoot or Charging Step attack. This move's DPS is very high, so even if you use it when your charge level is only at 1, it won't be the end of the world. Also, while in mid-air pressing X will let you trigger an Aerial Diving Melee Attack.

The Silkbind move Herculean Draw actually costs you 2 charges. It will also provide you with a 30 second attack buff, which you'll want to try to have up as much as possible.

Swings your bow in front of you. You'll need to be very close to the enemy to hit this so it might not be practical.

A strong attack which requires a long preliminary action.

Choose the coating you want to use with this command. Once you've used up all coatings, don't forget to switch back to Close-range Coating.

Dodges backward and crouches. While crouching, your stamina rapidly regenerates. If timed right, you can nullify a monster's attack. Use the Left Stick to change the direction of dodging.

Fire off a vertical arrow, shooting two more after it. This will be affected by your charge level, so it's best to use it right after a Shoot or Charging Step attack.While in mid-air, pressing X will let you trigger an Aerial Diving Melee Attack.

Surge forward in a designated direction. This move boosts your attack power for a short time as well. Consumes 2 gauges of Wirebug.

For beginners to the bow, the above set is recommended, as focusing on Rapid Fire is always a safe bet. Always try to maintain your ideal distance from the target when firing off Charging Step. Aerial Aim's DPS is also just too good to pass up.

When using spread ammo to fight at closer range, Dodgebolt is more useful than Charging Step. Stay closer to your enemy, dodging their attacks while dealing damage. Take Power Shot, as its stamina usage is simply less than its alternative. Aerial Aim is also just here for pure DPS.

Shoot three times to power up your charged shot to level 3. Then, perform 2 Power Shots (A → A). After that, repeat the loop of Charging Sidestep → Shoot → Power Shot x 2. If your stamina runs out, reduce the number of Power Shots to one and repeat the combo.

Even if you swap out Charging Sidestep for Dodgebolt, the essentials of this combo remain the same. You might need a bit more stamina in that case, however, so if you're running Dodgebolt consider using only one Power Shot.

Tips On How To Use The Bow

The Bow is a weapon that greatly benefits from changing around your settings. Gunner Reticle Speed in particular greatly affects your ability to accurately land Aerial Aim, so we recommend eventually switching it over to fast. We also strongly recommend you play with the Gyroscope off.

The Bow has a few basic mechanics you should familiarize yourself with if you want to master it. The types of arrows you use, as well as the damage done at various charge levels are both key to get down early.

Note that if you have the Bow Charge Plus skill activated, you can actually unlock charge level 4 of the Bow.

Check Out Bow Charge Plus Here

Shoot At The Right Distance

The Bow requires proper aiming at specific distances (also referred to as "critical" range/distance) to deal the most amount of damage. If you shoot from the critical distance, your damage will decrease. The opposite is also true; shooting outside the ideal range will cause your DPS to go down. Use Charging Step and Dodgebolt to position yourself into ideal range to keep your damage up.

How To Determine The Appropriate Distance

The aiming icon is your main tool in making sure that you're aiming at the appropriate distance. You'll know when you're right on the mark when you see the ◎ icon.

Power -> Close Range Coating Should Be Your Go-To Order

▼Read more about coating effects below

Charging Step and Dodgebolt are both extremely useful moves that will help you maintain your charge level while also dodging enemy attacks. Always ensure that you're at the max charge level.

▲ Read about Charging Step combos above

By using two Silkbind charges you can give yourself a 30 second damage buff. This is a really important buff to keep up, so make sure you always stay cognizant of it.

The Silkbind move Aerial Aim deals incredible damage. You'll want to use this ability as much as possible, but it will also be important to save gauges for Herculean Draw, so as not to let the buff fall off.

If you want to pull off a Wyvern Riding maneuver with the Bow, you can either try to deal damage with Aerial Aim, or simply use a Puppet Spider. Given that you'll be using Aerial Aim so much, it's likely that you'll inadvertently trigger Wyvern Riding anyway, so this is often your best bet.

Use Paralysis And Sleep To Create Openings

Paralysis and Sleep coatings are particularly useful in creating openings for teammates in multiplayer. The Stamina coating isn't particularly great, so you can feel free to not use that and focus on either using Blast/Poison to hit enemy weaknesses instead. That being said, Stamina coating can stun enemies, so if your ally has a blunt weapon and you're aiming for a monster's head, it's a good idea to use it.

Dragon Piercer, as the name implies, does in fact pierce and if you have a good angle on a large monster you can do 4-500 damage over 7-8 hits with one well placed DP

The leap switch skill is a killer move triggering easy wyvern ride, deals quite m***ive damage if all shots land, and allows you to evade ground attacks if timed correctly. With the right bow element to weakness, constitution, crit chance, element crit - the bow becomes quite powerful.

Update this, who ever wrote this is a straight joke.

i haven't played enough to be a total master, but the wyvern riding section is wildly inaccurate. when you get your switch skills, one of them leaps you into the air and shoots the monster. this makes wyvern riding extremely easy, especially since the skill only consumes one wirebug