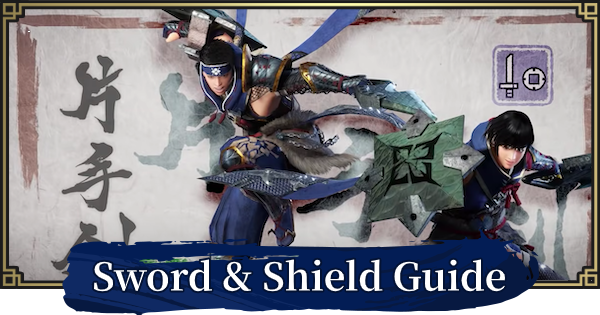 A guide on how to use Sword and Shield in Monster Hunter Rise (Switch). Includes changes in Sword & Shield moves (Silkbind attacks), game trailer, and combos (moveset) in MH Rise!

Controls Of Sword And Shield

One of the basic move of Sword & Shield. You can use it up to 3 times. The last attack has large stunning time so you'll mainly be using up to 2nd attack.

Lateral Slash can be used up to 3 times as well. Similar to Chop, the 3rd attack leaves you unguarded for certain period of time so use it up to the 2nd attack.

Tilt the L stick to the direction of where you want to attack and press A to perform Shield Attack. It's notable that bashing your shield on enemies' head can cause them to stun. Careful not to trigger Backstep since it has similar command.

Rushes forward and swings your sword down. You won't be using this move often since the sheathing speed of Sword & Shield is fast enough that it's faster to simply sheathe your weapon and run forward.

Swings your sword upward quickly. You can follow up with Chop or Lateral Slash to perform 3 quick attack combos.

An essential move for Sword & Shield user to chain combo. After using Backstep, you can follow up with powerful moves such as Leaping Slash, Charged Slash, and Perfect Rush.

By pressing X right after Backstep to perform Perfect Rush. By pressing X at the right timing, you can follow up with 4 attacks of Perfect Rush in total. When the hunter glows red, press X to chain combo.

By using Roundlsash (X +A) after any attacks, you can repeatedly attack the opponent. You can change the direction after Roundslash.

A forward leaping attack. A succsssful hit will lead into a Scaling Slash. You can also follow up with a Falling Bash to stun enemies.

Uses Wirebug to swing your blade around. You can nullified monster's attack at the beginning oft this move. Consumes 2 gauges of Wirebug.

Windmill can be used after other attacks to chain combo. Since Windmill is easier to activate compared to Falling Bash and Perfect Rush, you might want to consider adding this move to your combo to increase the DPS.

Tips On How To Use Sword & Shield

Characteristics Of The Sword & Shield

If you are using Sword & Shield, the movement speed will not change even if the weapon is drawn. Sword & Shield also has fastest sheathing speed.

Can Attack With Both Sword & Shield

Since this weapon type can attack with both sword and shield, you can cut off monster's tail with sword and stun enemy by bashing your shield on its head.

Cam Use Item While The Weapon Is Drawn

Sword & Shield is the only weapon which allows you to use an item while the weapon is drawn. It's very useful that you can use item instantly during the combat.

Can Become Attacker Or Supporter

Depending on how you play, a hunter with Sword & Shield can play as Attacker Or Supporter in your team. This weapon type goes well in many situation and friendly to both beginner and professional users.

The weakness of Sword & Shield is its short range. You'll need to get really close to the enemy to attack.