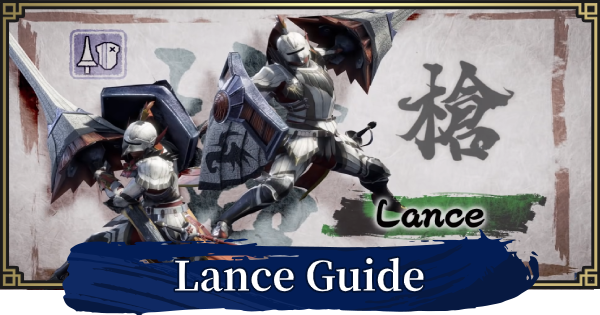 A guide on how to use Lance in Monster Hunter Rise (Switch). Includes changes in Lance moves (Silkbind attacks), gameplay trailer, and recommended combos in MH Rise!!

A thrust attack that strikes parallel to the ground. Good against small monsters.

A thrust that's angled to hit higher targets. It does more damage than the Mid-Thrust, making it the basic attack for the Lance.

A charge is added to the Wide Sweep in Monster Hunter Rise. Damage increases with more charges you have.

Bring your shield up to stop prevent taking damage from monster attacks. It has a wide range and high guard performance placing it at the top when it comes to defense power among all weapons.

Be able to move quickly while also guarding against attacks. This is best when closing the distance between you and the target. It can be further extended by pressing A to do a dive thrust.

Dive Thrust is an additional attack that you can do when doing Guard Dash. Use them in conjunction to close distances quickly.

The Lance's most well known attack. You can keep moving forward as long you have the stamina for it. Anything in your path will take damage.

Go on guard and counter monster attacks with the Counter-thrust. This provides both offense and defense when done correctly. If you do not release the button on time, it will be canceled.

Press ZR + A while charging Counter-thrust or during guard reactions to activate Power Guard. Your stamina will deplete as long as your shield is readied, but stun time for guarding will be greatly reduced until your stamina runs out, allowing you to swiftly counter-attack.

A Silkbind attack activated by pressing ZL + A. Attacks absorbed while your shield is up temporarily boost your attack power. The strength of the boost depends on the power of the attack absorbed.

With the High-Thrust being more powerful than the Mid-Thrust, your basic combo should consist of it the most.

A combo with the counter-thrust attack fitting into it. When the counter is decided, the combo will be reset and you can attack three times. If you land the counter, you can just keep on attacking.

Deal damage with a high damage pool. Since you can't keep doing the combo in a loop, you need to put in High-Thrust in between.

While the Kunai is stuck, you can jump while guarding to the position of the monster with the button input. Since jumping does not consume Wirebug gauge, you can freely zip between positions. This greatly increases Lance's overall mobility.

Use To Increase Attack Opportunities

Twin Vine is not only a good way to close distance, but it's great for dodging enemy attacks and utilizing opportunities to attack.

Hold the shield, and when attacked, your damage will increase for a duration while counterattacking. The damage multiplier increases depending on the damage of the attack.

Dash twice and attack quickly. In the official description it's mentioned that you can attack using a shield, so it's likely that you'll be able to guard using this as well. However, given that you have to choose between this or Anchor Rage, Spiral Thrust might not see a lot of use (unless it does exceptionally high dps).

Tips On How To Use Lance

The Lance is at its best when it's guarding. Its incredible guard power and plentiful counter abilities let you take hits without dying. For the Lance, the best offense is a good defense, so make sure you're always guarding.

Use Your Counter Skills

The Lance has a Counter attack which it can use when it takes a hit while guarding. If you get the timing right, you can continue to hit enemies repeatedly using this. The better you know a monster's movement patterns the more effective this strategy will be, so make sure to know what you're going up against.

Twin Vines is an excellent ability, but its hit box is somewhat small and it leaves you quite open. Even if you do hit, it can be difficult to maneuver and get off this jumping attack. If you have other means of dealing with a monster, use them instead.

Anchor Rage's attack power buff only last a short while. Use it right before the enemy gets off a move that you know will leave it open for a short while. Then, get off a powerful counter. This is a move you should always be trying to land.

Works Well As A Defensive Measure Too

You won't be knocked back or take damage when guarding during Anchor Rage, so it functions incredibly well as a defensive tool. You of course want to use it offensively to deal damage, but if you're facing an imminent threat don't hesitate to use it defensively.

Go For A Charged Wide Sweep

Charged Wide Sweep deals very high damage so you'll want to use it whenever the enemy is either downed or doing a move with a long animation. If you can get this off, this is one of the highest dealing moves the Lance has, so always try to go for it!