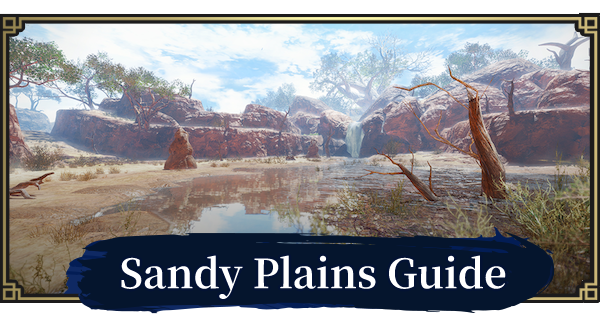 The Sandy Plains Map in Monster Hunter Rise (Switch) is a guide on the map, locations, monsters, environment, features, and more in MH Rise!!

In past games in the series, desert areas like the Sandy Plains are characterized by their hot days and cold nights. Because of this, hot drinks will run out, but what will happen to cool drinks is yet to be confirmed.

There will also be what seems to be archaeological sites which may be bases for Palicos.

The previous games had the Sandy Plains function as the connecting route between Area 9 & Area 10. This appears to be the case in MHR as well given the above scene from the official trailer where we can see hunters traveling with their Palamutes. It seems to be the road leading to several other maps as well.

※ The following are confirmed monsters!!

The Sandy Plains will be home to the new monster Almudron, as well as the returning monsters Diablos and Rathian.

Volvoros is a monster that is known to appear in sandy areas. Much like Almudron, this monster would often attack using mud.

Daimyo Hermitaur is a Carapaceon monster that mainly inhabits desert maps. There are no other Carapaceon monsters in MHR so far, but this might be the first one to appear if they will be also part of this game.

Monoblos is a monster that only appeared on Village Quests limited to solo play in past games. Since MHR also features the same solo Village Quests, we can expect Monoblos to appear as well.