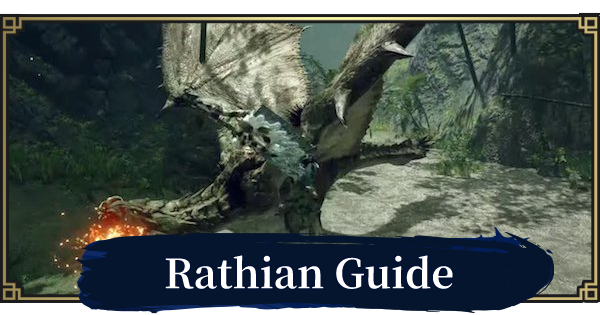 Rathian is a flying wyvern in Monster Hunter Rise (Switch). Read this MH Rise guide to know Rathian's weakness, location and where to find, how to fight, high rank drops, & tips!!

Rathian's main way of attack is by burning and poisoning its targets. When poisoned, HP is drained over time until the poison is removed. Bring Antidotes to deal with poison when fighting this monster.

Rathian - How To Fight

Watch Out For The Tail Attacks

Rathian's main attack stems from its barbed tail filled with poison. Getting hit by it, especially during its somersault, is a sure way of getting poisoned. Make sure to remove the poison as soon as you can as it will drain your health during the fight. Bring an Antidote to cure poison.

Attack The Legs From The Side

If you are not used to fighting a flying wyvern like Rathian, watch and attack only from the sides first. Rathian makes use of moves like somersaults and breath attacks to damage enemies at its front so staying at the sides can keep you safe. Once you down Rathian by hitting its other parts, go in and strike the head.

Similar to other flying wyverns like Rathalos, you should adjust your footing and position based on the monsters orientation. Keep it steady and safe from enemy attacks while your press on the offensive.

Has Many Openings When Not Enraged

Once you get used to Rathian's movements, get in and attack its head. Watch out for openings like breath attacks, and watch out for its charges and somersaults. When not enraged, Rathian is very open during these attacks, so get it and pile on the damage!

Attack When Rathalos Is Exhausted!

When exhausted, Rathian will be slow as it gasps for air. Also, its movements become sluggish making it very vulnerable. You can see if Rathian is exhausted if it drools from its mouth.

Make Good Use Of Flash

Flash Bombs are very effective against flying wyverns like Rathian. You can find bugs that produce them on trees or you can also use ones in the battlefield. When blinded with flash, Rathian's movements become chaotic and aimless, making it easy to attack.

How To Get Flash Bombs Guide

Somersault is an attack that is preceded by 1 turnaround before it hits its enemy with poison with its tail. This precursory movement is taken on the ground, but the attack itself is done quickly while midair. You won't get hit if you avoid it by moving side-to-side.

Attacks In Continuously When Angry

If Rathian attacks with somersault while angry, it does not settle down to the ground right after, but rather attacks in continuously while midair. Be careful not to aim for its head in hopes that it will lower itself to the ground.

Distance Yourself During As It Takes A Breath

Powerful fire breaths are delivered by retracting its neck, so use this as a chance to move yourself toward the sides of its head.

Fire breath is a move that is shot straight at the front. Consecutive fire breath involves 3 attacks in succession, giving ample opportunity to attack it from the sides of its head. When you notice it spreading its wings and start to breathe fire as it lifts its head, quickly move to its side.

An attack used while dashing. Although a good way to attack, it may counter while it's angry, so stay vigilant.

Rush Attacks Even While Airborne

May attack using rush as it lowers itself whie aflight. There are very few chances to attack while airborne, so we don't recommend forcing attacks this way. If attacking this way is difficult, simply run and avoid attacks while it's airborne.