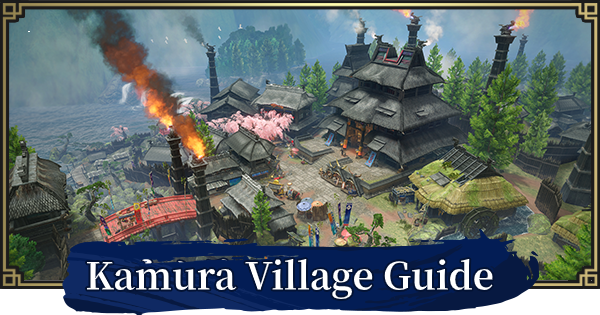 Kamura Village guide for Monster Hunter Rise & Sunbreak (Switch & PC). Find all characters in Kamura, all facilities, what you can do, shops, crafting, merchants, and more in here!

Check Out All Maps & Locales In The Game Here

What Is Kamura Village?

Your Home Base For Monster Hunter Rise

Kamura Village will be your home base location in Monster Hunter Rise. You'll be able to find tons of useful facilities here, including weapons and item shops.

Cast Of Characters In Kamura Village

Kamura Village is filled with tons of unique characters who will help you out on your quest. From the village elder, to the various shop vendors, you'll find a colorful cast to interact with every time you return home to Kamura!

A Connection To Magnamalo & The Rampage...?

Equipment stemming from Kamura village seems to have a Japanese-inspired design to it. This return to Japanese roots will make veterans of the series recall Monster Hunter Portable 3rd's Yukumo Village & its armor, which had a similar atmosphere and style.

Things To Do In Kamura Village

This section includes some speculation

Kamura Village itself is a rather big place, and it seems as if you'll be able to traverse it quickly using either the Palamute or the Wirebug. This will likely make getting around the village a breeze!

You will of course also be able to craft and upgrade weapons and armor in the village as well. This is a quintessential part of any Monster Hunter game, so make sure to get well acquainted with the village blacksmith, Hamon! He can be found in the Gathering Hub.

Near the blacksmith, we were able to spot a shop that looks like it could be an armor vendor. Although it isn't confirmed officially, it's likely that this will be a place to buy basic gear (which you can then upgrade). In past games, you could also get hunting items and quests as well

Kagero, the Merchant, seems to be in charge of a general goods shop where you can purchase items. Items will sometimes go on sale, reducing their price significantly. Once per sale, you can also pull a fortune! If you scan an amiibo, you can increase the amount of fortunes you can get to 3 per day!

It seems that Kamura Village is also full of delicious-looking foods to eat! It seems you'll be able to eat the village specialty - Bunny Dango! In past games, food provided you with stat increases and new skills, so it was always worth eating before going out on an adventure.

The Buddy Scout Facility is a place where you'll be able to choose the buddy that accompanies you on your adventure. In past games, it was possible to adjust your partner's attack patterns and battle style here, so maybe Iori will let you do that this time around as well.

You'll also be able to create armor for your Palamute or Palico in Kamura Village as well! The shopkeeper himself is a Palico, but he'll likely have no objections to crafting gear for Palamutes either!

By speaking to Feylne Chief Kogarashi, you'll be able to hire and deploy "Meowcenaries". In past games, there was an option to deploy troops like this to certain parts of the map to help you gather materials. Perhaps they'll fill a similar role this time around as well?

Master Utsushi is the arena master in Kamura Village. In previous games, this was where you could undergo tutorials for different weapons and accept quests to be done with specific armor equipped. We're expecting similar mechanics in Monster Hunter Rise as well!

The series staple trade ship will also be found in Kamura Village. In older games, you could spend special points here to obtain rare materials and consumable items. Your main vendor this time around will be Rondine, a traveler from a distant land.

The Training Area is a place where you can go practice combat! When you want to try a weapon you haven't used before, this is the place to come! In MHW, it was also possible to check how much damage you did here.

Check Out More Info On The Training Area Here

Work Together With Other Players

It's possible to enter Kamura Village with up to 4 other players! This will no doubt add another deeper layer of gameplay and increase communication options for players!

Official reveals so far have shown a picture of the hunter playing with a traditional Chinese toy called a Bamboo Dragonfly. This toy is also quite popular in Japan, where it's known as a Take-Tombo. Perhaps this will be an obtainable item in game?

In previous games we had the Poogie - in MHR it seems we'll have the Cahoot as our friendly base-dwelling pet. These owl-like creatures seem to be able to jump on your arm - and it seems you can feed them as well! There will no doubt be many ways to interact with them when in Kamura Village.

We were able to spot fishing activities in the village as well, carried out (unsurprisingly) by some Palicoes. We expect that this will be a fixed location where you can obtain fish!

At Komitsu's shop, you'll be able to buy sweet apples! It's likely that these apples will not be a traditional recovery item - they might have some other special effects!

Is Kamura Village the only village/town in MH Rise?