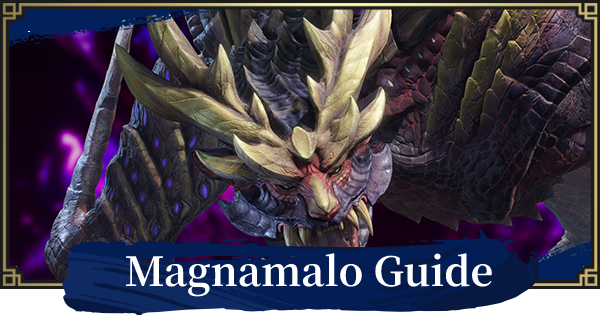 Check out this Monster Hunter Rise (Switch) guide on Magnamalo, the new monster. Know about Magnamalo, how to get Plate, including details, weakness, how to beat, & attack tips!!

Magnamalo is a new monster that is extremely agile and very aggressive. Its speed is coupled with heavy hitting attacks that can easily cart any unwary hunter with just one hit. To add, it also inflicts hellfireblight, a status effect similar to that of Blast.

How To Get Magnamalo Plate

Players looking to farm for Magnamalo Plate have a better chance of getting one with the higher rank version. It is 5 times more likely to appear than the low rank version, though 5% is still comparatively low. Also, destroying its parts and capturing it increases your chances of getting one.

Check Out The Magnamalo Plate Here

If you want to increase your chances, bring in 2 Gathering Palicoes. While not as reliable as breaking and capturing parts, you still do have a far better chance getting a Magnamalo Plate with 2 of these around.

Magnamalo - How To Beat Tips & Tricks

Be Careful Of Hellfire Blight

▲ The status effect is accompanied by the whistling of the wind.

Getting hit by Magnamalo's burning parts or fireballs will inflict hellfireblight. Aside from exploding after a short duration, you also receive more damage from attacks while inflicted with hellfireblight. Prioritize removing it once you get it.

Ignite Hellfire Orbs By Attacking Them

Hellfire Orbs left by using a Wirebug move can be ignited by either Magnamalo or the player. They also explode after some time so if you want controlled explosions that can even damage Magnamalo, aim to attack them.

Magnamalo usually covers its back, arms, mouth, and its tail with Hellfire. It can produce these flames after doing specific moves. Note that Magnamalo's attacks with the inflamed parts are stronger and it can start using special moves with those parts.

To add, inflamed parts are harder to penetrate, requiring high sharpness weapons to break. Weapons with at least blue sharpness can go through them.

Before changing to its final from, Magnamalo's low rank variant can only cover 2 parts with Hellfire at the same time. With the high rank version, It can cover its mouth, back, and one other part at the same time, making it more difficult to beat.

Be Careful Of The Explosive Gasses

If Magnamalo releases explosive gas clouds while it has its back covered with Hellfire, the color of these clouds changes to pink. This is a clear indicator that Maganamalo will use a special move so take care and watch out for it!

Remove Hellfire By Hitting Its Parts

Hitting Magnamalo's inflamed parts with enough damage will cause it to go down. Once Magnamalo hits the ground, all Hellfire covering its body will be extinguished. However, if the hellfire's color is purple, you need to hit its back to bring Magnamalo down.

Hellfire Is Removed Only By Parts When Purple

When Magnamalo's hellfire is purple, attacking it continuously will remove only the flames on the attacked parts. Even so, you can build up damage to bring it down, allowing players to hit hard to reach parts such as the back.

Back's Hellfire Remains Even When Exhausted

Magnamalo's Hellfires are removed when it gets tired except the one on its back. As its parts' defenses return to its normal values, you can easily hit them with normal melee weapons.

Once the hellfire's turn pink, Magnamalo will use a powerful move after a short duration of time. However, after using a powerful attack, Magnamalo removes one Hellfire from its body making that part easier to hit. Take this chance and go on the offensive!

Changes To Its Ultimate Form When HP Is Low

Magnamalo's rage mode changes once it reaches low HP. This form opens with Magnamalo creating an explosion around it while also growing its fangs and spikes. In low rank, it covers up to 3 parts of its body with Hellfire; in high rank, it covers its whole body. In its ultimate form, Magnamalo frequently uses explosions so be careful when fighting it in melee.

Leave A Wirebug For Escaping

Magnamalo uses a lot of combo moves and some gas attacks which can leave you dead if you're not careful. Remember to always leave a Wirebug charge so you can use Wirefall to escape these attacks. Also, remember to immediately drink Potions to restore your HP after dodging.

Use Hellfire To Down Magnamalo

Using the Wirebug whil inflicted with Hellfireblight will leave a Hellfire Orb. That Hellfire Orb will explode after sometime or after you hit it. If possible, take advantage of these orbs and place them near Magnamalo to bring it down.

Can Down More Than Once

You can down Magnamalo twice with Hellfire Orbs. However, it may take more than one Hellfire Orb to do so. As this is quite inefficient, try to at most do it once.

Be Careful Of Its Arms, Tail, And Fireballs

Magnamalo's generally attacks using its arms, tail, and fireballs. These attacks can be deadly combos or one-hit strikes so be very careful and watch out for them!

Raising its arm, Magnamalo delivers a devastating attack to those in range. If covered in hellfire, Magnamalo attacks twice and leaves explosions. This attack leaves Magnamalo vulnerable so dodge it and get ready for a counter attack!

Using its tail, Magnamalo shoots hellfire at the player. The number of fireballs are increased if its tail is inflamed. The first wave is directed at the player's position while the second one is aimed at where the player would be after moving. With that said, alternate moving left and right to dodge both waves.

When its parts are covered with Hellfire, Magnamalo gains access to more attacks with those parts. There is no need to remember all of them but knowing that it has more attacks can be invaluable during the fight.

When its mouth is inflamed, Magnamalo picks up and hurls a player upward. Then it produces gas clouds that explode after a few seconds. To dodge this attack, do a Wirefall to get out of range of the more damaging explosions when you get caught.

One of its more damaging moves, Magnamalo moves quickly around the field then ends with a Tail Thrust. This move involves multiple attacks and can be deadly when you get hit. When using its teleport move prior to the tail thrust, you can gauge where Magnamalo will land by looking at where it is pointing at so you can dodge the tail attack.

When covered with hellfire, Magnamalo uses its tail to deliver a sharp deadly attack. The range of this attack is extremely long so moving to the side is your only option. Once you see it spinning its tail, start moving to the sides to evade.

Run To The Left To Dodge Dive Attack

Magnamalo charges forward, retreats while leaving an explosive gas cloud, then dives for a crushing attack. Magnamalo will dive and hit targets to its right so roll to the left and then make a dive move to dodge the Magnamalo's dive attack. Magnamalo telegraphs this attack with a loud roar that ignites Hellfire around it.

When assuming its ultimate form, Magnamalo can cover up to 3 of its parts with Hellfire making it extremely dangerous. During the final stages of the fight, use Shock and Pitfall Traps to immobilize it and leave it open to attacks. You can also decide to capture it when its tired.