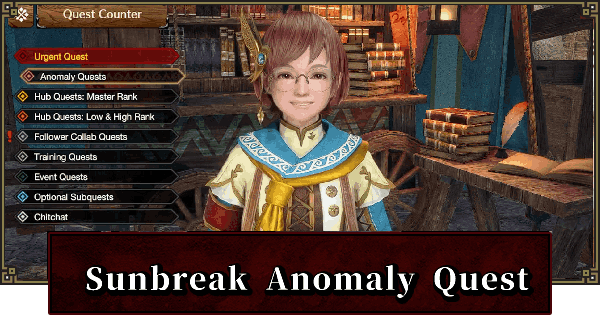 During the update that will occur during August 10, 2022, New level of difficulty for EX Quests is to be released. You can do EX★5 by selecting the new content "Anomaly Investigation Quest".

Afflicted Monsters That Will Appear

What Are Anomaly Quests?

Once you reached your Master Rank (MR)10, you will be allowed to investigate Anomaly Quests. After that, it will be released as EX1 and EX2 according to the master rank. This new high-level quest type brings a challenging task ranging from Lvl A ★ to Lvl A ★★★ difficulty to even the most frivolous monsters that only experienced hunters can handle.

Under the influence of Qurio, some monsters began to get Afflicted with a Delirious state that lead to the investigation that started the Anomaly Quest. These inflicted monsters can do massive damage and knockback with Anomaly Burst when you failed to do enough damage.

Take note that Delirious Afflicted Monsters can inflict you with Bloodblight which hinders you from healing HP and reduces the effectiveness of recovery items, this makes you more vulnerable to getting damaged and easier to knock out so be careful.

If you defeat the afflicted monsters in the quest, you will be able to obtain Afflicted Materials which you may use to unlock top-tier rare weapons and further enhance your equipment.

After clearing some of the Anomaly Quests investigation missions a few times, talk to the Wyverian lead scientist of the research team, Bahari who is located at the Elgado Outpost to get your Anomaly Tickets reward. Collect these tickets as you will need them to craft and upgrade Hunter Equipments.

How To Unlock Anomaly Quest