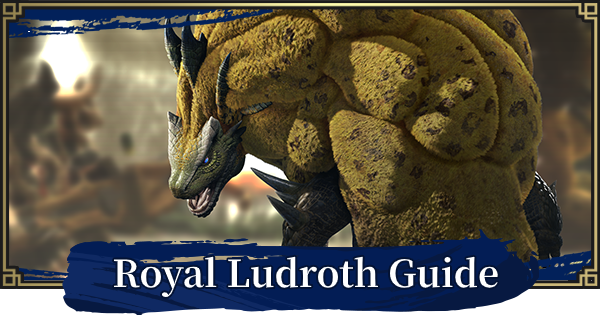 The Royal Ludroth, as its name implies, is a bigger, beefed up version of the regular small Ludroth. It also leads its smaller relatives into battle, acting as the head of the pack. When hunting, make sure to look out for them nearby if you spot a Royal Ludroth. It's possible to be ambushed if you're caught unaware!

The Royal Ludroth is considered a large monster and is particularly powerful. It will likely act as a major boss in the early game, giving players a chance to fully put into use all the hunting techniques they've picked up. You'll have to particularly watch out for its hard-to-dodge rolling attack!

The Royal Ludroth can be found in the Flooded Forest locale. It is a creature well adapted to watery environments, so it's unsurprising that it an be found here.

In previous versions of the game, a variant of the Royal Ludroth was able to use poison attacks instead of regular water. It was necessary to bring antidotes and other means to deal with its poison attacks. Perhaps this variant will also exist in Monster Hunter Rise?

The Royal Ludroth chooses a direction and sprays water orbs. We haven't been able to confirm this attack via official releases so far, but in past games when the orbs hit and explode, they afflicted you with the Waterblight debuff.

The Royal Ludroth bends it body backwards and falls over, flattening anything caught in its way. After it falls, you'll have a big opportunity to deal damage, though you'll have to dodge the ability first.

There are two main variants to this rolling attack: one will be a normal roll which just rolls to the side, and the other will be a "charge" which rolls in the hunter's direction. Simply dodge to the side when you see this coming.

This variant of the water breath has the added affect of the Royal Ludroth recklessly charging around the field (in no particular set direction). This attack is rather fast and will probably take you by surprise the first few times it happens - make sure to get used to dodging it as soon as possible!

In previous games in the franchise, it was possible to fight the Royal Ludroth underwater! When its HP got low, it would head back into the water to rest up. It's not known if this behavior will appear in Monster Hunter Rise as well.