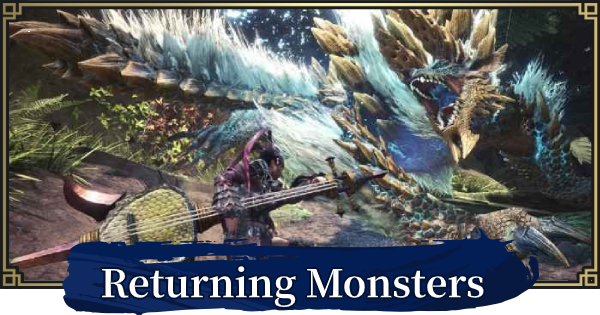 What Monsters Do You Want To Return The Most?

Not on the list? Let us know what monsters you're anticipating most in the comments below!

Kushala Daora is a large dragon covered in steel. This Elder Dragon was announced to be included in Update 2.0!

Teostra is a fiery Elder Dragon with the appearance of a lion, capable of producing explosions by itself. This monster is included in the game's 2.0 Update!

Chameleos hails from Monster Hunter 2, and is one of the Elder dragons from that game. Just like its name implies, it is capable of blending into its surroundings and turning invisible, as well as inflict status conditions and stealing from hunters. Chameleos will be available in April's free title update.

Arzuros was confirmed to be coming in MHR at quite an early stage. It seems to feature quite early in the game. It doesn't seem to do a lot of damage, but there is the possibility that the more powerful variant, the Redhelm Arzuros, will be featured in this game as well (though this has not been confirmed)!

The Hunter displayed in the promotional image for the Hunting Horn seemed to be wearing armor similar to that of Basarios! The shape of the helmet and weapon look undeniably similar to that of the Basarios armor in past games. If this is true, we can also probably expect to see Gravios in MHR too!

The Great Baggi was also confirmed in the Jan 7th event. It's sure to bring its characteristic sleep-inducing attack this time too, so we'll have to be careful.

The Great Wroggi leads a pack of regular Wroggis, using poison to attack its enemies. What's more, it can drop its dangerous poison in a large area, forcing you to maneuver away from it. This can be quite a challenging foe to deal with.

Khezus's return was confirmed in a short teaser. It seemed to have all its usual abilities, such running electricity throughout its body! The return of Khezu has a lot of people excited and should be a blast to play against.

Lagombi's appearance has also been confirmed. It is a fanged beast just like Arzuros, and it incorporates snow into its attacks. It'll even slide on its belly towards you!

Mizutsune was first seen in Monster Hunter Generations, and was one of the "elite 4" monsters of that game. In the Jan 7th Digital Event it was confirmed to be appearing in MHR! It uses bubbles to attack and play around with its enemies - though it's possible to use its bubbles to buff yourself as well!

The Water Beast Ludroth was seen in the second MHR trailer. It seems to lead a pack of other Ludroths near a watery area. It stores water in its characteristic spongy neck, allowing it to move freely on land. This enemy is rather tricky due to its very hard to read water spray attack.

A monster that looks like Slagtoth has been spotted. This is likely to be quite a nostalgic sight for those who remember this monster. It is small in stature, but packs a surprising punch.

We were able to spot a monster in the livestream which resembled a juvenile form of Tetsucabra! We feel that its fully grown form will also likely show up in Monster Hunter Rise.

The 4th MHR Trailer on The Rampage which aired on February 18 featured Diablos doing his trademark charge and roar. It's a monster that has regulary appeared in several other games in this series.

Volvidon was featured in the 4th MH Rise trailer highlighting The Rampage which aired last Feburary 18th. It's known to be a tricky opponent given its ability to paralyze and full-body rolling attacks.

The 4th MH Rise trailer aired on February 18 featured Rajang. Since it was previously know to live in various habitats, you can find it roaming through various maps in the game.

Zinogre was one of the flagship monsters of Monster Hunter Portable 3rd for the PSP. In the Jan 7th Digital Event we were able to spot Zinogre's armor! We didn't see an actual Zinogre in the broadcast, but we're fairly certain that if its armor is in the game, so will the beast itself.

Nargacuga is a uniquely evolved monster that lives in thickly wooded forests. It hides in the dark, and with its fearsome quickness, it relentlessly and cunningly targets and hunts down its prey. Its tail, developed as a weapon for fighting, is very flexible and has strong destructive power.

The infamous bomber monster of Monster Hunter World has joined Monster Hunter Rise's roster last Ver. 2.0 Update. His bombs are still strong enough to deal massive damage to the players so be careful on facing him.

As its other name implies, the Anjanath has an incredibly powerful bite that you'll need to watch out for when taking it on!

Barioth first appeared in Monster Hunter 3, and they've also been spotted in MHR's new Frosty Islands locale. It seems they'll be using a similar breath attack they had in previous games!

In a video showcasing the new Wirebug feature, we were able to see characters fighting against a Jyuratodus! It will likely appear in the Flooded Forest area, where it should have plenty of mud at its disposal to launch its usual attacks.

Kulu Ya Ku was featured in the sword and shield showcase video. In MHW, Kulu Ya Ku fought you while holding eggs and boulders, but in this video we saw it carrying a pot! This is a slight change, but the monster itself is definitely confirmed.

In the Lance intro video we were able to spot a Pukei-Pukei! This monster first appeared in MHW and uses its long tongue and poison to defeat enemies. It will likely pop up as an enemy in the first half of the game.

Rathalos has been confirmed in a MHR trailer! Rathalos is a staple for Monster Hunter, often called the "King of the Skies" due to its incredible flying power. Its high-damage breath and mid-air attacks will no doubt also be making a return.

Rathian was seen in the showcase video for the Greatsword. Known as the Queen of the Land, this beast boasts incredibly powerful legs. It seems to still use its breath attack, and will also be bringing back its characteristic somersault!

Tigrex made its first appearance in Monster Hunter Portable 2nd and was one of the signature monsters. It is incredibly powerful, eating weaker herbivores to sustain itself.

Tobi-kadachi is returning, after debuting in MHW. In the previews, we were able to see it getting attacked by the flagship monster Magnamalo. Just like Arzuros, Tobi-Kadachi is expected to be one of the tougher boss enemies in the early section of the game.

Gravios is a wyvern that is mainly spotted near volcanoes. Just like its name, the "Armor Wyvern", implies, it has an extremely hard carapace that is hard to penetrate. This monster's movements are slow, though its bastion-like stature and powerful beam attack are quite a threat to hunters.

Likely To Return With Basarios

Basarios is the Juvenile form of Gravios, and given that we've seen armor that looks like it comes from Basarios, we feel it's very likely that Gravios will also be featured in this game.

Amatsu was the final boss of Monster Hunter Portable 3rd. This incredibly powerful Elder Dragon had the power to summon up tornadoes to attack its enemies. Given Portable 3rd's Japanese style, we feel that it would be a good fit for MHR as well.

The Sea Wyvern Lagiacrus was the flagship monster of Monster Hunter 3, and could be fought underwater. That, alongside its ability to manipulate thunder, makes it a good fit for Monster Hunter Rise's world!

The new monster Somnacanth also has the appearance of a Sea Wyvern. We were also able to spot it swimming, and though it's not certain, there might be a chance we'll be getting underwater combat. In Monster Hunter Generations, you were only able to fight the Lagiacrus on land, so we're hoping it'll return in the water this time around.

Ukanlos is the last boss of Monster Hunter Freedom Unite. Since it covers itself with silver carapace and dig into the frozen ice. Perhaps it might appear in the Frost Islands map?

Gigginox is a snake-like monster similar to Khezu. It sticks on the ceiling of cave and perform a surprise attack with its poison. There might be a possibility of Gigginox appearing with Khezu and start turf wars.

Since Mizutsune appears in MH Rise, there is a possibility of other MH Generations monsters making their return. Since Gammoth lives in the cold environment, it might appear in Frost Islands map.

※ The monsters below are given purely as examples!!

The Daimyo Hermitaur and the Shogun Ceanataur are giant enemy crabs introduced in Monster Hunter 2. Given that they use titles used in the Japanese military, we feel they might be a good fit for Monster Hunter Rise's theme! These beasts are a huge threat in the early to mid game, and pose an entirely different threat than dragons, due to their unique walking style. Hit their weak points for massive damage!

The Elder Dragon Inagami was introduced in Monster Hunter Frontier for the PC. It has the power to manipulate bamboo, can harden itself using its own bodily fluids, and has sleep-status inflicting abilities. We think it might be a good fit for Rise due to the connection of Bamboo with the more Japanese theme of this current game!

Velkhana needs to return too

gammoth need to come back

I really do hope we get gammoth to see him have a turf with tigrex barioth deviljho and rajang and to wyvern ride her.

i want kecha wacha in rise

I really do hope we get gammoth in this game i think he would fit well in the frost islands.