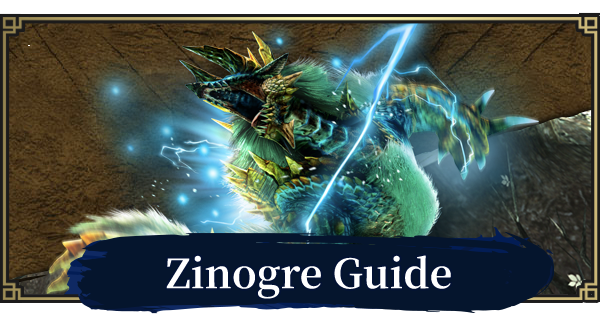 Zinogre attacks with tremendous speed, using its body to delivery deadly melee attacks. Keeping distance is also a problem as it can conjure lightning to strike foes from afar.

Zinogre - How To Fight Tips & Tricks

Zinogre's attacks can inflict Thunderblight. Getting stunned is easier while having this status ailment so try to deal with it as soon as you can. You can also make use of Steadfast Jewel to have Stun Resistance.

Attack When Zinogre Is Charging

From time to time, Zinogre will stop to charge until it reaches its supercharge state. During these charge times, you can get in to attack as Zinogre is very vulnerable during these few seconds. To know when Zinogre will charge, you can see it when it tries to dodge and keep distance.

Attacks Are Stronger When Supercharged

After gaining enough charges, Zinogre becomes supercharged, having faster and stronger attacks. It also gains access to more attacks. However, Zinogre has a lower defense when supercharged, making it vulnerable to even low sharpness weapons.

To cancel Zinogre's supercharged state, hit it until it flinches. You can try hitting the more vulnerable and softer parts like the head, back, and legs for this.

Loot Zinogre's Back During Down State

You can loot Zinogre's back while it is down. Doing this not only gives you some materials but it also reduces the frequency of its charges and shortens its supercharge state. Attack it during charges to down it, then position yourself near its back to loot.

Shock Traps Last For Only 2-3 Seconds

Shock Traps are ineffective against Zinogre. This is true for both its normal and supercharged state. If you want to capture it, use a Pitfall Trap instead.