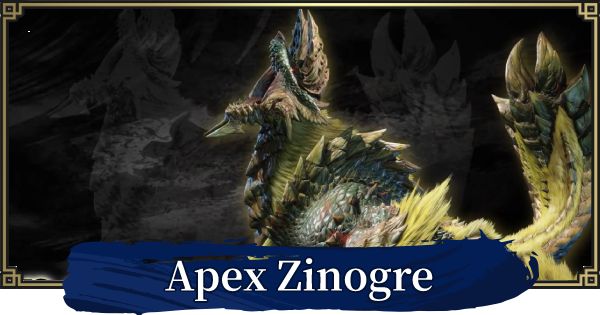 Apex Zinogre is a new monster in the 3.0 Update in Monster Hunter Rise (MH Rise). Guide includes how to unlock Apex Zinogre, weaknesses, how to beat, monster info, & more!!

Apex Zinogre - How To Unlock

You'll have to hunt Apex Zinogre at a Rampage Quest to unlock this monster on standard quests. Note that you'll have to take it down completely, meaning, just fighting it won't count.

Monsters from Rampage Quest appear randomly. Even if you meet the Hunting Conditions, there's a chance that Apex Zinogre Rampage Quest won't appear immediately. If this happens, try to clear/fail any quest so that the Rampage Quest resets.

Apex monsters have returned and are part of Monster Hunter Rise's unique Rampage mode. What's more, during the May 26th Digital Event, Apex Zinogre was officially confirmed to be added to MH Rise via Rampage Quests and Hub Quests!

Check Out Details On The 3.0 Update

*Based on actual values in game.

Apex Zinogre - How To Fight

Apex Zinogre has many powerful lightning attacks, so it's best to protect yourself with plenty of lighting resistant armor to prevent taking in more damage. Lightning damage becomes ineffective if the total lightning resistance hits 20.

Get hit enough by lightning attacks and you'll end up fainting or getting stunned. Equip armor with stun resistance effects to prevent this. Stun becomes ineffective if you have at least Lv3 stun resistance.

Keep Close To Its Hind Legs

Apex Zinogre inflicts heavy damage with its forelegs and frontal attacks. The good news is that it has almost zero back attacks, so it's best to keep close to its hind legs. The hind legs are also weak and breakable, so you're hitting two birds with one stone by doing so.

Apex Zinogre will launch 3 wall-like bolts of thunder with its Thunder Pillar Attack and are quite dangerous if you're hit. You'll know it's attempting this attack when you notice that the ground starts to shine. Take that opportunity to evacuate, or if caught in the crossfire, then move through the gaps.

Dash & Evade To Avoid Getting Hit By Combo

Apex Zinogre has a deadly combo as seen in the video above. Once caught in this attack combo, it would be very difficult to evade it, so make sure you sheath your weapon and quickly dash away.

Apex Zinogre will shake its tail in preparation for its Ground Thunder Pillar Attack. Get hit and you'll take in damage, so make sure to avoid going through the pillar.

Can't Wyvern Ride Nor Trap Because It's An Apex

As will all other Apex Monsters, you won't be able to control them with Wyvern Riding nor capture them with traps.

Apex Zinogre performs a rush attack just like the regular Zinogre. However, due to its larger body, evading this will likely prove harder than the regular variant's attack.

Same as regular Zinogre, Apex Zinogre also has a jumping attack which you'll need to be very careful to dodge.

With this attack, Apex Zinogre will land a lightning-infused punch.

After electrifying his body, Apex Zinogre will generate a stream of lightning on the ground. This attack looks evadable as long as you do not step on the afflicted part of the ground.

Apex Zinogre will launch three wall-like bolts of thunder. You can avoid getting hit easily by positioning yourself in the gaps.

Same as regular Zinogre, Apex Zinogre also uses a Tail Whip Attack. However, this Tail Whip is usually followed up with a Pillar Attack, so be careful not to get hit by his tail.