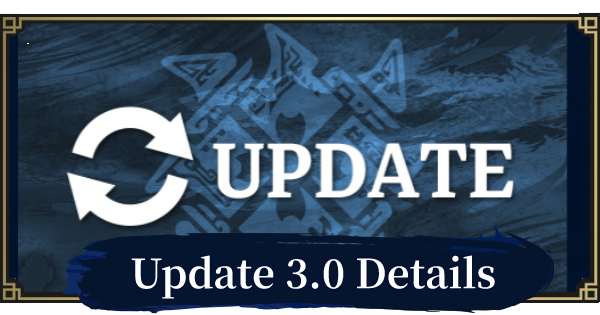 Released On May 27th

During the May Digital Event, the 3.0 update for Monster Hunter Rise was officially confirmed to be coming out on March 27th, 2021. Given the release timing of the previous update, we feel we can expect this patch to hit at 0:00 UTC on May 27th!

You'll need 1.4GB to successfully install Ver. 3.0 on your switch. However, for those updating for the very first time, you'll need up to 2.9GB of space to accommodate all updates thus far.

This update will offer new content for all Monster Hunter Rise players. You'll just need to download the update once it is released.

Crimson Glow Valstrax was confirmed to be added in 3.0! This main monster from Monster Hunter Generations is one of two "new" monsters to be added this time around!

An Apex version of the regular Zinogre enemy has been confirmed for 3.0!

The two Apex Monsters added in the last update, Apex Rathian and Apex Diablos, will now be fightable in regular quests. Players can look forward to challenging these two in a non-Rampage environment!

A new ending involving the Wind Serpent Ibushi & Narwa The Allmother was added to the game in 3.0. This quest will require you to fight both of these enemies at the same time, so make sure you're prepared.

The Twins Are Involved...?

The twins of Kamura Village, Hinoa and Minoto, appeared to be possessed by something in the footage shown. It's likely that they'll play some part in the confrontation between the above mentioned serpents.

Version 3.0 will bring with it new Awards for players to obtain! The third page of rewards currently only has three entries on it, so we feel it's likely that more will be added, giving players more to do in terms of completing their gold and silver collections.

New weapons, armor, and decorations will be added, with crafting and upgrading also being possible. In combination with this, new Skills and Rampage Skills will also be making their appearance.

A full detailed roadmap was revealed for the next few months of Monster Hunter Rise. These will include a total of three different CAPCOM Collab events, as well as additional DLC.

Click the button below to open details about previous updates.

Looking For The 2.0 Update?

April 6th saw another bug fix update for Monster Hunter Rise. If you're looking for information on that patch, make sure to check out the link below.

Other Preparations Before The Update

Things To Do Before The Update

It's possible that we'll be getting additional Village Quests in 3.0, so we strongly suggest clearing all the existing quests first while you still have the chance.

There’s also a chance that there will be new Quests which unlock with higher HR, so do your best to get your HR up as high as possible.

Talismans will really help you make your equipment even stronger - collect Talismans and use them on the new monsters that you'll encounter.

Since there's a possibility that the new & returning Monsters will be quite formidable opponents, use this as an opportunity to create or upgrade your Armor.

There's a chance that a new Rarity of Rampage Weapons will be added once a new Apex Monster appears. Collect materials now so that you can upgrade them at any time.All Weapon Types List & Silk Bind Attacks Guide

Collect As Much Money As You Can

With the new Monster Update, there's also a chance of having new Weapons and Armor. Collect money as early as possible so that you can purchase the added gear when the update goes live.

How To Make Zenny Fast