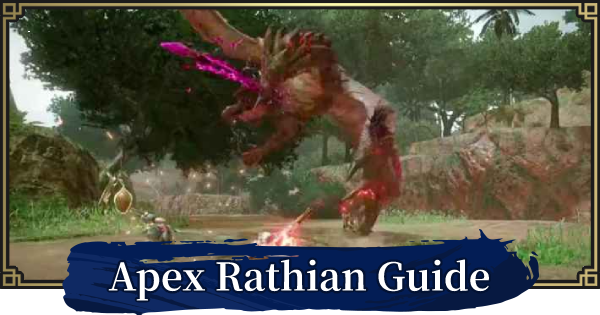 This article is a work in progress. Check back later for updates!

To Be Available In Normal Quests (2.0)

Though previously only available in Rampage Quests, players will now be able to take on Apex Rathian in regular quests as well! To do so, you'll need the 2.0 update, released on April 28th. For more info, check out the 2.0 Update guide below.

Check Out The 2.0 Update Here

Just like some other Apex creatures available in the game at launch, Apex Rathian will be fightable in Rampage Quests.

It is recommended to equip Gears or Decorations with Poison Resistance Lv 3 or bring Antidotes since Apex Rathian attacks frequently with poisonous effect.

Always Be Aware Of Somersaults

Apex Rathian launches a devastating Sommersault Tail Whip three times. The first attack has a gap movement that will stop for a moment, but it attacks immediately for the second and third time. So it is important to be prepared to avoid it while assuming that the second or third attacks will come.

Attack After Landing A Somersault

Somersault Tail Whips cause a large gap from the time they occur to the time they land. There are the above patterns in the behavior after Somersault and if you remember the pattern of landing, you will have a chance to attack.

Distance Yourself When Breathing

Apex Rathian's breath will not hit you if you are on her side, so it is recommended that you attack her head while breathing fire. But when enraged, she will use her Fire Breath three times, so the range becomes larger.

Aim To Weaken The Attack By Cutting The Tail

Cutting the tail of Apex Rathian removes the poison slime and further weakens Somersault when enraged. Cutting the tail is worth a shot as this will neutralize her attacks.

Attack Her When In Fatigue State

▲ Fatigue state of a Normal Rathian

Even Apex Rathian also experience fatigue like taking a stiff motion like shortness of breath and slows down. If you noticed that she drools from her mouth, it's a sign of fatigue, so don't be afraid to attack.

Check Out Other Apex Monsters Here