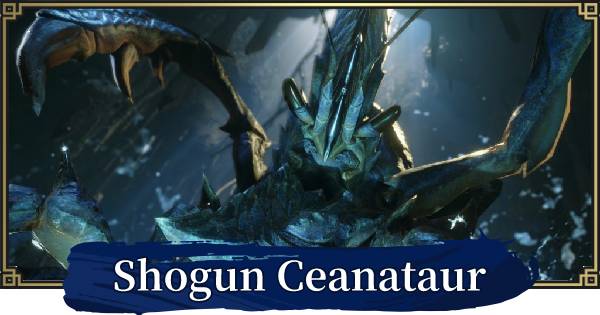 Shogun Ceanataur is a Large Carapaceon monster that will be returning on Sunbreak that originally appeared in Monster Hunter 2. Its characterized by a huge skull that protects its weak back, sharp sickle-like claws, and agility that helps it to hunt down the prey. If Sunbreak is a Western motif, it may have a god of death frame with a claw theme.

Will Daimyo Hermitaur Appear As Well?

When it comes to the revival of Carapaceons, the revival of the double-edged Shield Crab Daimyo Hermitaur is inevitable. Shogun Ceanataur and a target monster that protects themselves with a huge shield. I'm looking forward to the follow-up report.

Speaking of Shogun Ceanataur, it is also characterized by carrying the skull of the wyvern Gravios as an armor. With the presence of juvenile Ceanataur, the resurrection of Gravios is almost certain.

The appearance of the Shogun Ceanataur Armor is released on official Monter Hunter Twitter channel! The sharp design is nostalgic for old-fashioned players. Characterized by an excellent skill composition for proximity, it was a beloved piece of equipment in past works.

Shogun Ceanataur Characteristics In Past Works

Shogun Ceanataur is more powerful than the weight of a single blow, as it has a powerful continuous attack that does not blow it away. It is often dying before you know it. When enraged, its claws expands and the the maximum range of its reach is extended, making it a difficult enemy on top of its high-speed movements that makes it difficult to approach.

Enranged When Any Of Its Claws Are Broken

If you break Shogun Ceanataur claws, it goes into a rage mode in the previous works. This tricky specialty increases its overall basic abilities to compensate for its range being shortened. However, since this specification disappeared in the last Monster Hunter 2, it is unknown what will happen with Sunbreak.

Ground Attacks Is Also One Of Its Prominent Moves

A surprise attack after diving into the ground is also a specialty of Shogun Ceanataur. It pops out continuously like a sickle It seems that you can easily avoid it if you stay in the air with Wirebugs , but you may use measures such as jumping out with your whole body vigorously.

The Attack Differs Based On The Species Types

▲The video shows an attack move that is unique to the two subspecies, but the normal variants can also shoot water.

The Shogun Ceanataur carries huge skulls and coiled shells as its protection. The most distinctive of these is the a skull belonging to an wyvern known as Gravios. At this time, it fires a pressurized water from its shell. In some cases it uses its own urine as its hydraulic laser.

When a Shogun Ceanataur's skull is entirely smashed, its back, a key weak spot, is revealed. Because there are few ways to target its back, this is a good opportunity to deal a lot of damage. It will eventually plunge to the ground and carry a fresh Skull on its back.

There Are Two Variants And Two Names

There is an orange subspecies of Shogun Ceanataur. Carrying the skull of the Gravios subspecies. There are also two names with a rainbow-colored claws called Armor Crack Shogun Ceanataur. It seems that the subspecies will be implemented as variant as it is, but in that case, Daimyo Hermitaur's participation can be expected.

Use A Slashing Attack

Shogun Ceanataur's claws can cause lacerations. It can status ailments that causes bleeding and damage over time with each attack. It can be recovered by crouching or using items for a certain period of time, but it is difficult to recover in front of a quick Shogun Ceanataur.

▲ Back to the top