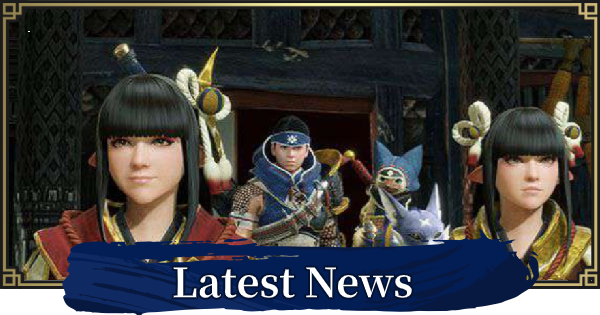 You are about to face new dangers as your investigations into the Anomaly advances with the Free Title Update 1 this August 10, 2022! Prepare to hunt for the upcoming Weekly Event Quests starting this August 18 to get exclusive rewards. Aside from this, you will face new Afflicted Monsters in the new system: Anomaly Investigation where you'll have take on more challenging Monsters in new Locales. Also, get to access additional paid DLC content for your character and hunter buddies. The thrill of the hunt is just starting so get your gears because open season is about to begin!

Sunbreak Demo Is Out Now!

It's time to discover new horizons and face new monsters in the latest Monster Hunter Rise: Sunbreak! Its demo version is now available and can be played on both the Nintendo Switch and Steam platforms. You'll be able to experience new locales, Wirebug features, new Silkbind attacks and more. So check out the full details in the article linked below to learn more about what upcoming adventures await you in Sunbreak!

During the May 26th Digital Event, it was revealed that Monster Hunter Rise's patch 3.3 will be heading our way at the end of August. It is also recently released via Monster Hunter Rise Official Website that the new update 3.3.1 will be released on August 26th!

During the May 26th Digital Event, it was revealed that Monster Hunter Rise's patch 3.2 will be arriving toward the end of July, and the update was finally released on July 29th!

The Event Quest Rising Sun!? was added on July 30th in collaboration with Okami. You will be able to craft "Ammy Palamute Layered Armor" after completing the quest for the first time.

During the May 26th Digital Event, it was revealed that Monster Hunter Rise's patch 3.1 will be released in June 24, 2021. Details are likely to come at some form of Digital Event in the latter half of June!

The Event Quest "Bird Wyverns Of Ruin?" was added on June 18th in collaboration with Monster Hunter Stories 2: Wings of Ruin. You will be able to create "Tsukino Layered Armor" after completing the quest for the first time.

Aside from the previous announcement for the Tsukino Palico Layered Armor. Hunters can also obtain the Kinship Talisman by playing the trial version of the game and Rider Layered Armor by using the saved data from Monster Hunter Stories 2 on July 9th.

Future update dates were also announced in the Digital Event. Check out info on them below:

Version 3.0 of MH Rise has officially been announced and confirmed to come out at the end of May. The release date as well as other details of the update were given during the Digital Event on May 26th!

In celebration of Monster Hunter Rise selling over 6 million copies worldwide, all players have been distributed a pack full of goodies! We've been able to confirm this pack is now out, so make sure to check your mail and pick up the useful items contained within!

New content, monsters, and other features are to be added in Monster Hunter Rise! Check the link below for more details.

Capcom has just announced that a fix is on the way for the Melding bug. With this bug, inputting a specific combination will produce multiple copies of the same Talisman. We can expect the bug fix to come via a patch with Update 2.0.

Monster Hunter Digital Event - April 2021 is coming up next week!

Tune in for news on the first free #MHRise update (Ver. 2.0), feat. Chameleos, Apex Rathalos and much more, as well as the latest info on #MHStories2.

English names for Monsters marked with ※ are not yet known. Instead we've written the transliterations of their Japanese names!!

Check Out All New Monsters Here

Spearheading all of the new monster additions in Monster Hunter Rise we have the Magnamalo. This menacing creature will be the game's "main" monster, and can be seen fighting a Tobi Kadachi, and seems to play a prominent role in the game's story.

Attacks With Its Tail?

In the trailer we saw the Magnamalo's tail grow purple and fly towards the Tobi Kadachi. We're not sure exactly how it will make use of its tail to attack, but it's clear that it will play a part in this monster's attack patterns.

The Wirebug is a new type of tool that will change how you see the world of Monster Hunter Rise! It acts like a grappling hook which allows you to traverse steep rocky terrain, zip around open areas, and even combine it with moves to create devastating attacks!

Check Out The Wirebug Here

One interesting addition to the game is that you seem to be able to throw barrel-bombs while mid air, leading to as massively powerful explosion!

New Moves For All Weapons

Each Monster Hunter weapon type is seeing additions in temrs of new special abilities. Thanks to the Wirebug, you'll find your overall versatility go up as you get brand new ways to use your favorite weapons.

Hunting Helpers are a new type of Endemic Life that will, as the name suggests, aid you in your hunt! They can be used as items and grant you boons, or be used to grant effects on monsters.

Camps Are Same As MHW

Camps appear to function in the same way as they did in the most recent game in the franchise, Monster Hunter World. You can change equipment and items, even during the middle of a quest, providing you a respite from otherwise tough challenges.

Cahoots are adorable owl creatures which will join up with you on your quest. They are reminiscent of Poogies from previous games, as they'll be able to communicate with you! Additionally, they'll alert you to the location of monsters in the wild as well!

The Palamute is a new companion you can bring along in Monster Hunter Rise. They are canine-like creatures which are large enough for you to ride! This means you'll be using them as a means of transportation, since you won't consume any stamina while riding them!

When you're not riding on a Palamute, they'll be able to assist you in battle by fighting monsters. Palamutes are more suited for battle than Palicos!

New Features For Palicoes As Well

Palicoes will of course be coming to Monster Hunter Rise. It seems this time around they'll be providing a more supportive role, to better contrast with Palamutes. Though we're not sure of the details, it seems that by popping a bubble with a paw mark on it, you'll gain various supportive buffs!

Can Have Up To 2 Buddies At A Time

It will be possible to bring a maximum of 2 buddies along with you on your quests. You can choose a combination that best suits your playstyle, meaning you can have two Palamutes, just one, or none if you so choose!

Posisble To Design Your Own Buddy

You'll be able to choose the fur color, eye shape, and other features of your buddy as well. You'll likely be fighting alongside each other for quite a while, so it might be worth spending some extra time on the character creator to make your companion look exactly how you want it to!

The Shrine Ruins are a place surrounded by mountains and forests with a dark and lonely atmosphere. It was said that there are plenty of discoveries to be made in this mysterious place, so it will no doubt be quite worthwhile to explore!

Monster Hunter Rise will employ seamless travel between areas, without needing to load! You'll be able to get from zone to zone smoothly, just like in MHW: Iceborne.

Flooded Forest Is Back

First making its appearance in Monster Hunter 3, the Flooded Forest is returning for Monster Hunter Rise! The giant ruins that abound the area will no doubt make perfect targets for your Wirebug, allowing you to traverse the zone freely.

Kamura Village seems to be one of the most pivotal locations in Monster Hunter Rise. The atmosphere is clearly inspired by traditional Japanese architecture - made particularly evident by the brilliant castle in the village. Kamura will also have many of the facilities players are used to seeing, such as the Smithy.

The Rampage & Its Effects

Kamura village seems to have been beset by the terrible Rampage. This was an event where hoards of monsters attacked the village - it seems that your goal in Monster Hunter Rise will be to prevent this Rampage from happening to the village again!

Monster Hunter Rise comes out on March 26th, 2021 exclusively for the Nintendo Switch. There are several editions with various bonuses, so make sure to compare them before deciding which one to buy.

Check Out The Editions Here!

A limited-time only demo of Monster Hunter Rise is now available! However, you can only download and play this until February 1st, so make sure to give this a try before it's taken down!

Check Out The Demo Guide Here