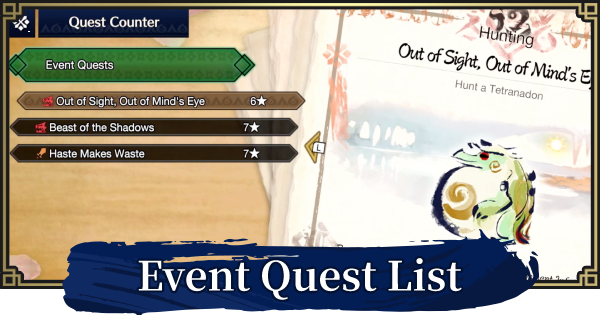 Tempest In The Desert

Tempest In The Desert - Event Quest

An Icy Blade So Bright

Heart of a Hero

Heart of A Hero - Event Quest

Fooled In The Flooded Forest

Heart Of A Ninja

The following special titles can be earned by clearing this event quest:Heart Of A Ninja - Event Quest Details

I Can't Do What Somnacan

I Can't Do What Somnacan Quest Details

Out of Sight, Out of Mind’s Eye

Out of Sight, Out of Mind’s Eye Quest Details

Beast of the Shadows

Beast of the Shadows Quest Details

Heart Of A Warrior

Heart Of A Warrior Quest Details

In order to access Event Quests, you need to talk to Senri first. After getting and downloading it it via the Add-on Content menu, you must then talk to Minoto at the Hub to take the quest.

Can Be Played With Friends

While you can access Event Quests offline, they too can be played together with friends, allowing you to have fun together while getting the event-exclusive rewards. Note that you need to be online in order to open your game to other players.

What Are Event Quests

Event quests are a special form of quests added in April 28th's 2.0 Update. They will include special objectives for players to complete and offer a variety of rewards.

▲ Ninjutsu Gesture from the "Out of Sight, Out of Mind's Eye" event quest

Play event quests to get access to cool rewards such as cosmetics and gestures. While you can play them multiple times, do remember that you can only get their rewards once!

How To Raise HR Rank Guide

Cosmetic Rewards To Be Included

Event Quests added later on in the game will eventually feature cosmetic rewards, likely similar to the glasses featured above in the Digital Event.

There are also plans to add new event quests later down the line which will reward players with new stamps and gestures. The above are some of the ones shown during the April 27th Digital Event.

In addition to being available for everyone, these new Event Quests will be playable offline once you've downloaded them onto your game! You'll be able to replay them as many times as you wish.