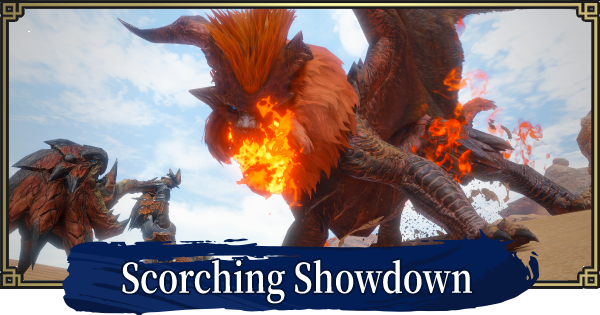 Scorching Showdown is a ★7 High Rank Event Quest for Monster Hunter Rise that was added after the 3.3.1 August Update. In this Quest, you will need to Slay Teostra in Sandy Plains.

Upon clearing the quest for the first time, you will unlock the "Cheering" Gesture. You can use this to express yourself to your friends, so try to complete the quest!

Weakness Of The Monsters

Teostra relies heavily on fire attacks to deal damage. Increasing your fire resistance greatly reduces your chances of getting carted when fighting against it. However, note that some its attacks can damage you, especially when it is covered with dragon fire.

Teostra covers itself with 2 types of flames that indicate its current moveset. When moving, Teostra lets out a roar and its face turns pale blue when in both modes. Both modes increase Teostra's attack power and allows it access to its ultimate move. Teostra loses its covering once it finishes doing its ultimate move.

Dragon fire covered Teostra deals passive damage to those near it. If you're a melee weapon user, keep constant watch on your HP bar. Position yourself and hit other parts of Teostra instead. You can also do hit and run to damage its torso.

When covered with flames, Teostra deflects ranged attacks that target its torso. Normal, Scatter, Elemental, and Status Ailment shots are rendered useless during this mode. Aim and hit at its more vulnerable tail and head instead.

When moving and while covered with fire dust, Teostra will scatter dust that explode after a few seconds. This can be difficult to evade if you are not mindful of your direction. Always roll away from Teostra when dodging and wait out the explosion before going in to attack.

Hit The Pale Blue Head To Down

When enough damage is dealt to Teostra's head once its face turns blue, it goes down. This also removes any fire covering that it has. Use this as a chance to attack as it can prevent Teostra from using its ultimate move.

Destroy The Head To Weaken Its Ultimate Move

How to Unlock Scorching Showdown