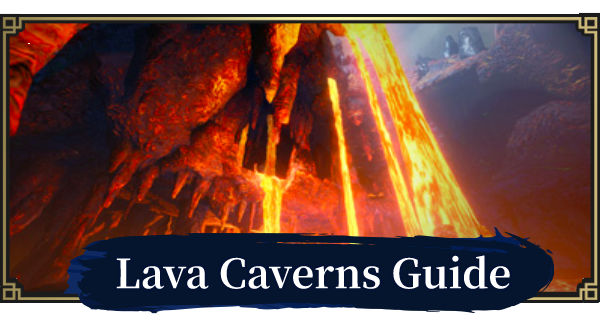 The Lava Caverns Map in Monster Hunter Rise (Switch) is a guide on the map, locations, monsters, environment, features, and more in MH Rise!!

The Lava Caverns have a strange area that has cold water despite its hot surroundings. With that, we can assume other monsters aside from the heat-resistant types may be inhabiting this area. Since the new game doesn't seem to require countermeasures for extreme temperatures, we're still unsure about how these environments will affect the hunter as a whole.

A Place Similar To Rotten Vale

Deeper into the area with cold waters, there seems to be a place that looks very much like MHW's Rotten Vale. The fangs and jaw bones found on the ceiling are starkly similar to the shape of ancient dragons. Rotten Vale played a major role in the storyline of the previous game, so it's possible that the Lava Caverns may play a similar part in Monster Hunter Rise.

Monsters that favor volcanic areas such as Basarios and Volvidon are sure to appear. The new monster Rakna Kadaki will also be inhabiting this area. Cold environment favoring monsters, however, have yet to be announced.

※ The following are confirmed monsters!!

The leviathan named Agnaktor that swims in lava and previously appeared in Monster Hunter 3 may also make an appearance in this map. The other 3 sea dragons Almudron, Somnacanth, and Mizutsune have all been confirmed to appear in MH Rise, so it's highly likely that Agnaktor will be a key sea dragon for this area.

A very popular monster that was featured in Monster Hunter 3. It's known for its slimey blast attack and is likely to appear in this volcanic environment.

Gravios is Monster Hunter's veteran monster and has been featured even in the very first game in the series. It's known to inhabit the same areas as Basarios, so it's highly likely it will make an appearance as well.

Lavasioth is a piscine wyvern that is known to swim in lava. It first appeared in Monster Hunter Frontier and also appeared in other games in the series including MHW. Since the same monster type Jyuratodus has been confirmed to appear in MHR, it's very possible that Lavasioth would be featured in this game as well.