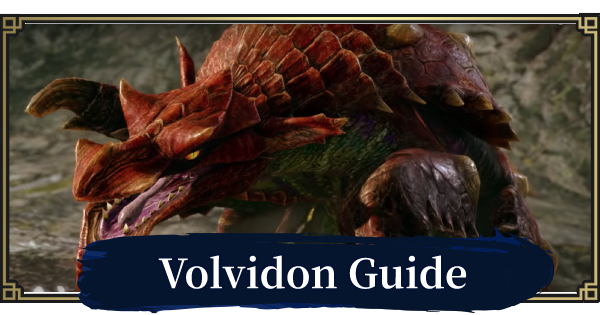 Seen On The 4th MHR Trailer

Volvidon was featured in the 4th MH Rise trailer highlighting The Rampage which aired last Feburary 18th. It's known to be a tricky opponent given its ability to paralyze and full-body rolling attacks.

Learn More About The Rampage Here

Volvidon is a monster that has 2 primary elemental status effects: paralysis and stench. Paralysis is dangerous because it prevents movement, and stench disables the use of food & drink. Make sure to bring deodorants with you!

Volvidon is known to inhabit the volcanic landscapes of the Lava Caverns. It can also be found in desert environments like the Sandy Plains.

※ Based off of previous games in the series.

It's easy to get paralyzed with Volvidon's attacks, especially when hit with its toungue. Make sure to wear paralyze-resistant armor.

Attack From Its Sides

Since it paralyzing attacks are usually fired at a straight forward line, try to attack From its sides to avoid getting hit. However, note that if you attack too close, you can get afflicted with stench from its stink cloud.

When hit with gas attacks like stinky cloud, you get afflicted with stench. This status disables consumption of food or drink. Make sure to bring deodorant balls to ensure that you can get rid of stench soon after getting afflicted.

This attack consists of a full body roll wherein it would rush forward then back. It's a linear motion, so you can evade it by moving to the sides since it won't move left nor right.

An attack wherein it extends its tongue. Variations of this attack include forward extensions and side-sweeping motions.

Stink Cloud releases gas in a wide area. If the gas hits you, not only will you take in damage but will also get afflicted with stench. Use deodorant to counteract its effects.

Breathes out a paralyzing liquid in a forward motion. Evade by moving to its sides.

Scratches by swinging both its hands. It moves forward for an extended period of time, so try to avoid getting hit by moving left or right until it finishes.