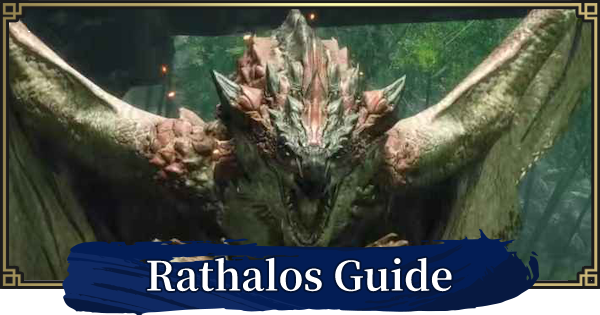 The iconic Rathalos returns in Monster Hunter Rise to terrorize players anew. This flying wyvern is relentless with its attacks, flying around the battlefield and devastating hunters with its fiery breaths. Together with Rathian, this classic monster features new moves together with classic ones.

Rathalos Quests & How To Unlock

Aside from the Village and Hub quests, Rathalos also appears in Rampage quests as a Flyer. However, note that you may have to finish a couple of Rampage quests in order to spawn a quest with Rathalos.

Players can unlock Rathalos in the Village Quest by completing several ★4 quests. Afterwards, players can play and farm Rathalos as a ★5 quest.

Rathalos - How To Fight Tips & Tricks

Use Flash Bombs To Crash Rathalos

Rathalos can be an annoying monster if you're a melee weapon user as it takes a long time for it to go down. If you want to speed up the process, you can use a Flash Bomb to send it crashing down.

Resistance Against Flash Bombs Builds Up

Compared to previous Monster Hunters, Flash Bomb effects have been nerfed and now only lasts for a short amount of time. You can only effectively Flash Bomb Rathalos 5 times. Exceeding that makes it immune to flash so make every throw count!

While flying, Rathalos can kick with its legs causing those hit to be poisoned. It can be incredibly dangerous when fighting Rathalos as its hard hitting attacks plus poison can spell an instant death. Bring Antidotes to quickly get rid of the poison status.

Rathalos' ranged and ultimate attacks are all fire-based. Having a negative Fire Resistance can instantly kill you so try to raise it using equipment and Dangos.

Cut Off The Tail First

If you're using a cut damage weapon like Long Swords and Great Swords, concentrate on severing the tail first. With its tail cut off, Rathalos has a far lesser reach, allowing you to safely move back after attacking.

Rathalos can use a gliding breath attack, burning those underneath it in a straight line. Before doing this attack, Rathalos will twist its body then head straight towards the player's location. As it needs to be distant to do this move, you can simply go either left or right to dodge this attack.

Rathalos' head can be a very tempting target but most of its breath attacks are directed at its front. When attacking, do not overcommit and try to stay away once you land your initial strikes. You can also roll inwards and attack body parts after hitting its head.

Run Away From Its Hover Breath Move

A move that Rathalos can perform is that it can hover and breath fire down on the surface. The range and duration of this attack is quite long and it can reach even distant players. While easy to dodge, getting caught in it can kill you so dodge to the left or right once you see Rathalos rear its head.

When mid-air Rathalos uses its claws to damage players around it. This attack does significant damage and inflicts poison. Be on the watch when it starts to pull its legs while mid-air!

Get In During Tail Swipes

When on the ground, Rathalos spins twice to damage hunters that surround it. Instead of going out, if you're a melee player, you can get in under its belly to attack it further during this attack. Note that it always swings its tail twice. However, be careful of its dive attack once Rathalos is done with its tail swipe.