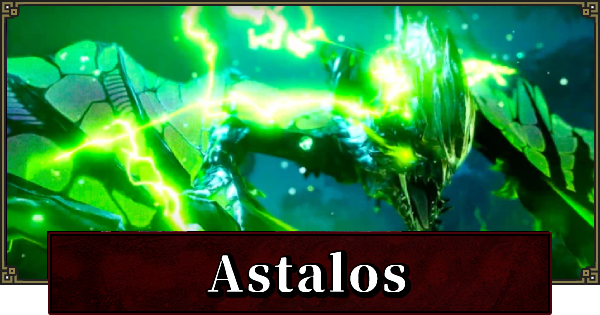 You Can Fight Astalos In The Demo Version

Sunbreak's trial version has been released this June 14! Astalos returns from Monster Hunter Generations and may be challenged in the Expert Quest in the Demo version. Astalos is notably known for its advantage of charging and powering up its electrifying attacks.

You'll get electrified when you get hit by Astalo's lightning attacks which may result in fainting when you absorb too much damage. To avoid this, make sure to use Nulberries to heal and recover some lost HP. Pick some on your way in areas around 1,3 and 5 where they are usually found.

Aim For The Charged Parts

Astalos can charge itself by accumulating energy in its tail, wings, and head. When these parts get charged, the damage output of the following attacks increases and becomes faster. So hit these areas when you have a chance during the gaps in its attacks. Note that when you use a Shock Trap it will power up Astalos instead.

Charged Parts And Their Characteristics

Astalos Goes Down The Ground When Its Power Gets Discharged

When it exhausts all of its accumulated charges, Astalos goes down. Attack the head and wings which are easy to aim. However, the risk of being hit increases, so do not overdo it.

Attack Other Charged Parts As Well

It is recommended that Astalos should be targeted on its weak spots. Chase Astalos when it gets on the ground and attack the areas where it stores its electricity, this way it will refrain from accumulating power. Furthermore, its charged state gets released.

Tips For Getting Around Astalos

When the head or tail is charged, it can shoot a Lightning Beam. There is an initial movement in which the head fins charge up and emit light. Just before it swings down its tail, it will be aligned with the hunter's position, so make sure to dodge it to avoid getting hit. After this, there is a short gap where you can take your chance to attack the head.

[Tail Charge] Discharge When The Tail Is Wagged

If its tail is electrified, it will discharge an electric shock after its tail swing. The tail is lifted as an initial action for the discharge, so avoid to the left or right when you see it.

All Parts Of The Body Are Electrically Charged

When all parts of the body are charged, it jumps up high and performs an Electro Slam. Move far away from the spot because when it lands, it discharges electricity all over the area, so do not approach it immediately. After the discharge is completed there will be a short gap you can use to attack.

Watch Out For Astalos Aerial Attacks

If the Astalos fly midair and then comes around, they will use their tails to strike you. You can evade it by moving back in time with the swooping attack, but keep in mind that you will be pursued after Astalos flies and the camera angle is changed.

Astalos spits a moving thunder breath and then fires an Electro Ball. It can be safely avoided when you dodge backward at the start of the attack since you'll get a better view of its trajectory. If you are close, remember that lightning moves in a diamond shape, which makes it easier to avoid.